Posted by: admin in Uncategorized on August 31st

The Poarch Creek Indian Princess Competition has one main rule—the person running for the title has to be ready to represent their tribe in a most uplifting and positive way. The younger generations look up to the tribal princesses throughout their entire reign. I knew that from experience as I was the chief leader in our Poarch Creek Tribal Youth Council for three years.

As a leader, I was asked to stand and speak at public conferences to represent my tribe to the best of my ability. I was also asked to set a good example for the future leaders of our youth council. I am now nineteen years old, but I was the chief of the youth council up until I graduated from high school in 2011. I was also named the Poarch Creek Junior Princess from 2011-2012.

My duties as Junior Princess were just as great as they were for the Senior Princess. When they place the crown on your head—at any age—you have to take a big step and become the leader you know you can be. Throughout my reign as Poarch Creek Junior Princess, people watched me heavily—from the children to the adults of our tribe.

Trying to live a godly life and showing kids there is more to life than just enjoying worldly pleasures is what my reign was about. People think the title is something taken lightly, but when the title is actually placed upon you, there is a lot of responsibility that goes with it. It isn’t just a sash, comb, and crown to make the princess look pretty; it is a way to separate the princess from the rest. A way to show that the princess is separate and can make a difference as a person.

To win the title of Poarch Creek Indian Princess, you must know numerous things. First, all contestants are required to have the traditional calico dress with the apron and moccasins on during the competition. The apron signifies the women as the helper of her household. Women would wear their aprons when picking berries and place the berries in their pockets until they came home. Also, the apron would shield the women a little more from the heat of the fire when they were cooking.

Second, the contestants must know much about their cultural background. We all took basket weaving classes from our elders, as well as language and history classes throughout the competition. I learned more from our elders of the tribe than I did in our classes. Finally, the contestants must feel comfortable with themselves as a leader and speaking in public. There were a lot of events where I had to stand up and speak about what I believed was right and what I would like to see changed.

Being alone in a crowd of people as the only Apostolic child of God can be hard. When I let that fear go, I carried myself in the most godly way I could and showed myself true to God. Each young person can be just like that. When we think about it, aren’t we are all princes and princesses in God’s kingdom? So let’s carry ourselves true to God and make Him proud. 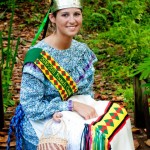