Posted by: admin in Uncategorized on December 21st

“Truly I tell you, whatever you did for one of the least of these brothers and sisters of mine, you did for me.” –Matthew 25:40

Christmas. That wonderful time of year filled with programs, lights, gifts, décor, food, etc. In other words—stuff, stuff, and MORE STUFF! We live in a world where more is more and more is better. Somewhere among the hustle and bustle, Jesus is inserted in there. Right there nestled below our four billion light display, you can see a small vintage manger scene. After all, Jesus is the reason for the season.

Over the Christmases, Jesus has been made smaller, and our stuff has been made bigger. I don’t believe there’s anything wrong with gift giving, Christmas programs, light displays, or parties. I enjoy them all! But I am guilty of becoming so caught up in the festivities and gifts that I forget to take the time to really honor the One Christmas is all about. Not only to honor, but also to be a representation of the true meaning of Christmas. The Lord was the ultimate gift in giving of Himself, and we are to mirror Him by giving of ourselves to serve others.

It took me a few Christmas season to learn this. I was five years old during Christmas 1994. There was a special edition Cabbage Patch doll I had wished, written, and prayed to get for Christmas. A Cabbage Patch Kids Bath & Shower Baby, to be exact. It came with a tiny bath ring, shower, bath toys and of course, a little robe. I’m not sure why I remember this so vividly, but maybe it’s because it’s one gift I wanted with every part of me. As Christmas morning approached, the anticipation grew and grew! When that morning finally arrived, I tore through each gift in a frenzy. I don’t even remember any other gifts I received.

Finally, I was unwrapping the very last gift. Could it be? It was!!! I was overjoyed and ecstatic. For a brief moment, I was fulfilled and content. Yet, today, I could not tell you where that doll is, and when I stopped playing with it. The ultimate Christmas gift of ‘94 has now been discarded and was probably sold at one garage sale or another for a fourth of the price that had been paid for it.

Now let’s fast forward to about four years ago. I come from a very large family and each year we put everyone’s names in a hat and let each person draw one name. Each family member buys only one gift so we are not stuck trying to buy everyone something. My mom worked with a lady who was a single parent and struggling to get by. She expressed her concern about not being able to buy much for her kids for Christmas. Being the wonderful giver my mother is, she suggested our family, instead of drawing names, buy gifts for this woman and her kids. Of course my family was in favor of this idea. That woman and her kids had a fabulous Christmas, and I can say my Christmas meant so much more to me, being able to give to someone else.

At five years old, I did not quite understand or grasp the real meaning of Christmas. Early on I experienced the lack of fulfillment that came from a gift that would eventually be placed aside never to be used again. But years later, being able to give to someone who was less fortunate was more fulfilling than any gift I could receive.

As a young person, college student, or young adult you may not have all the financial means in the world to give back all you would like, but giving of yourself does not require something of monetary value. You can give of your time, your talents, and your energy to be used to help someone out. Whether it is going to carol at a nursing home, serving hot cocoa at a homeless shelter, or just making a point to smile in midst of the craziness that comes in the holiday season, you can be a representation of Christ. Enjoy all the decorations, the gifts, the programs, and the excitement, but don’t forget what and Who Christmas is all about.

It is about so much more than all our stuff. 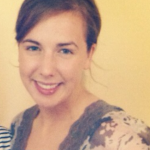 My name is Cydney Vaught. I am 23 and from Arkansas. I have my Bachelor’s degree in Communication Disorders. I strive to be real—the real me God intended me to be.