Posted by: admin in Uncategorized on April 14th

One day while I was getting some books from my locker, one of my friends told me she and a group of friends were going to the movies Friday night and wanted to know if I’d come. I told her I didn’t go to movie theaters.

“Wow! That must be a real sacrifice for you,” she said and went off to her next class. The next night on her way back from the movies, she was killed in a car crash. Sacrifice? Really?

A few months later, I was walking up the sidewalk to school when a girl I vaguely knew came up beside me and began to walk with me.

“You’re that girl who always wears skirts, right?” she asked.

“That must be a tough sacrifice for you to make,” she remarked.

I mumbled noncommittally and climbed the steps to the front door of the school when another student suddenly zipped around me, opened the door, and held it open for me.

“Thanks,” I said smiling. “What a gentlemanly thing to do.”

“Anything for a lady,” he replied cheerfully. Sacrifice? Really?

During my senior year, my very close friend Jodi approached me about a party happening later that night.

“You should come! You never come to any of the parties or anytime we hang out,” he complained. “Is such a huge sacrifice really necessary? What could it hurt, just this once?”

I thanked him for the invitation but politely declined. At the party that night, during a game of Russian roulette, a bullet got stuck in the chamber of the gun. When it came his turn, Jodi Foster accidentally shot himself in the head and died instantly. Sacrifice? Really?

My mom told me these stories she recalled from her high school years while we were driving to praise practice before Tuesday night church. The stories posed a question that has been on my mind for some time now. What is considered a sacrifice?

As Apostolic kids and teenagers, there are a lot of boundaries in our lives—a lot of guidelines, rules, standards, and “dos and don’ts.” Recently, I’ve found myself viewing these guidelines and boundaries as some great sacrifice I’m giving God: the movies we don’t watch, the music we don’t listen to, the websites we don’t visit, the books we don’t read. Are these considered a sacrifice?

Abraham was commanded to sacrifice Isaac on Mount Moriah. Hannah gave her only son to be raised in the Temple. Job lost all he had on this earth and was left alone and destitute with dogs as company. Compared to these, my “sacrifice” really doesn’t seem to measure up.

Look at the elders of our Apostolic movement. Our patriarchs. The anointed. Those who walk with God. Their lives are defined by sacrifice. They suffered extreme poverty and persecution. They allowed worldly influence absolutely no quarter in their lives. Television and movies were a sin. If you wanted to read, you got out your Bible, and if you wanted to dance and break it down, you danced in the altar in a Sunday night shout-down service.

The most incredible thing about this lifestyle, though, is they didn’t consider it their sacrifice. It was their honor. It was their way of telling God, “Thank You.” Thank You for another day, for the protection of my family, for my health, for the blessings You’ve poured out on my life, for this Holy Ghost anointing You’ve made available to me. To compare their sacrifice to mine is embarrassing and hypocritical. What am I really giving Him?

Some of you may have read the story of the father whose house caught on fire. This father jumped out the window to save himself, wrapped himself in a blanket, and then ran back inside to save his two- and four-year-old daughters from the raging inferno. When the firemen finally put the fire out, they found the charred remains of the father a few feet away from the remains of the two little girls. That is a sacrifice.

Suddenly the movies I don’t watch, the music I don’t listen to, and the time on the internet I don’t spend don’t seem to be such an imposition. If I were asked to give it all up, could I? Or more importantly, would I?

Have we become so enamored with the world that that this would be considered a great sacrifice? Sacrifice? Really? 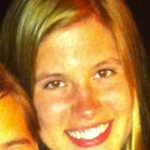 My name is Shyla Davis and I’m a high school junior in Myrtle Beach, SC where my parents pastor a church. I enjoy poetry, long walks on the beach, and poking dead things with a stick… Kidding! I’m passionate about the Kingdom and I’m ready and willing to follow God’s will wherever He may lead.