Posted by: admin in Uncategorized on August 17th

In December of 2011, my twin brother, Dillon, and I began a prayer and Bible study group in our middle school called iPray. The idea came to me at a youth camp that past summer. We were challenged to go home and make a difference in our schools. In our middle school we knew kids who were doing drugs, involved in gangs, causing trouble in school, and some who were even in trouble with the police. We knew kids who were having sex, had terrible home lives, some who were abused by family members, and others were left to fend for themselves while their parents were too drunk to care for them. These kids were angry. Some were even sad or depressed to the point of inflicting pain and harm on themselves. I began to get a burden for these kids. These were people with real problems and real issues. Someone needed to make a difference. Someone needed to change the atmosphere of our school. That someone had to be us!

I approached my principal about the possibility of beginning iPray. To my surprise, he was in favor of it. After researching the possibilities, he told me we could gather around the flagpole or, if we could find a teacher willing to host iPray in their room, we could meet inside the school. I approached a teacher whom I knew was very religious. She enthusiastically agreed to allow us to meet every Thursday morning. On December 8, 2012 we began with four students, including Dillon and me. We promoted iPray within the school by passing out fliers and inviting our friends. I created a Facebook page, spending hours messaging friends about iPray and God. At first, there were kids who made fun of us. I can’t say that didn’t bother us, but I can say it didn’t stop us from doing what we had set out to do.

Little by little iPray began to grow, bouncing from four to seven, then back down again. In January, we hit a record attendance of twelve! As excited as we were, I knew God had a plan and purpose for iPray in our middle school, and I wasn’t satisfied with a handful of kids. We were determined to do everything we could to see it grow! We tried every evangelism technique for iPray I had witnessed my dad do in our church. We purchased earphones, iTunes cards, and Christian CDs for giveaways. The attendance jumped to the twenties! We outgrew our room and found a larger room to meet in.

Dillon and I were teaching Bible studies during lunch and rec. Not only were we teaching them to students, we were having the opportunity to teach them to staff members. We may spend five or ten minutes, but at least we were able to share the Word of God! I had taught a Bible study to one of the boys named Taylor, and he repented of his sins and asked his Trinitarian pastor to re-baptize him in the name of Jesus. In a Trinitarian church, in front of their congregation, Taylor was baptized in Jesus’ name and came up out of the water speaking in tongues!

Just before the end of the school year we decided to make as big of a push as possible. We challenged the kids who had been coming to bring their friends. We ordered iPray t-shirts to give away. On our final iPray on May 18, we had 72 students and six staff members! From December to May, over 100 students had attended iPray, and every one of them have been led through repentance.

We have adopted the motto, “Do what you can—where you are—with what you’ve got.” We decided to do something. We’re just thirteen year-old guys who allowed God to use them. We’re going back for our 8th grade year, and we believe that iPray will be bigger and better than last year! I challenge you to open yourself up to God using you. You can make a difference! You can change the atmosphere of your school! Your purpose is simple—Go and do! 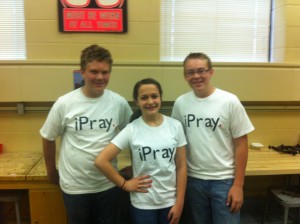 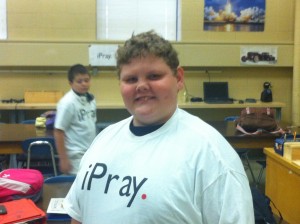 a student rocking out our iPray t-shirt 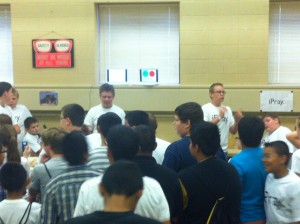 On our final iPray on May 18, we had 72 students and six staff members! 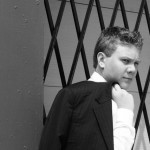 Spencer and his twin brother Dillon began iPray at Frankfort Middle School when they were only thirteen. They are looking forward to a bigger and better year this school year.