Posted by: admin in Uncategorized on December 17th 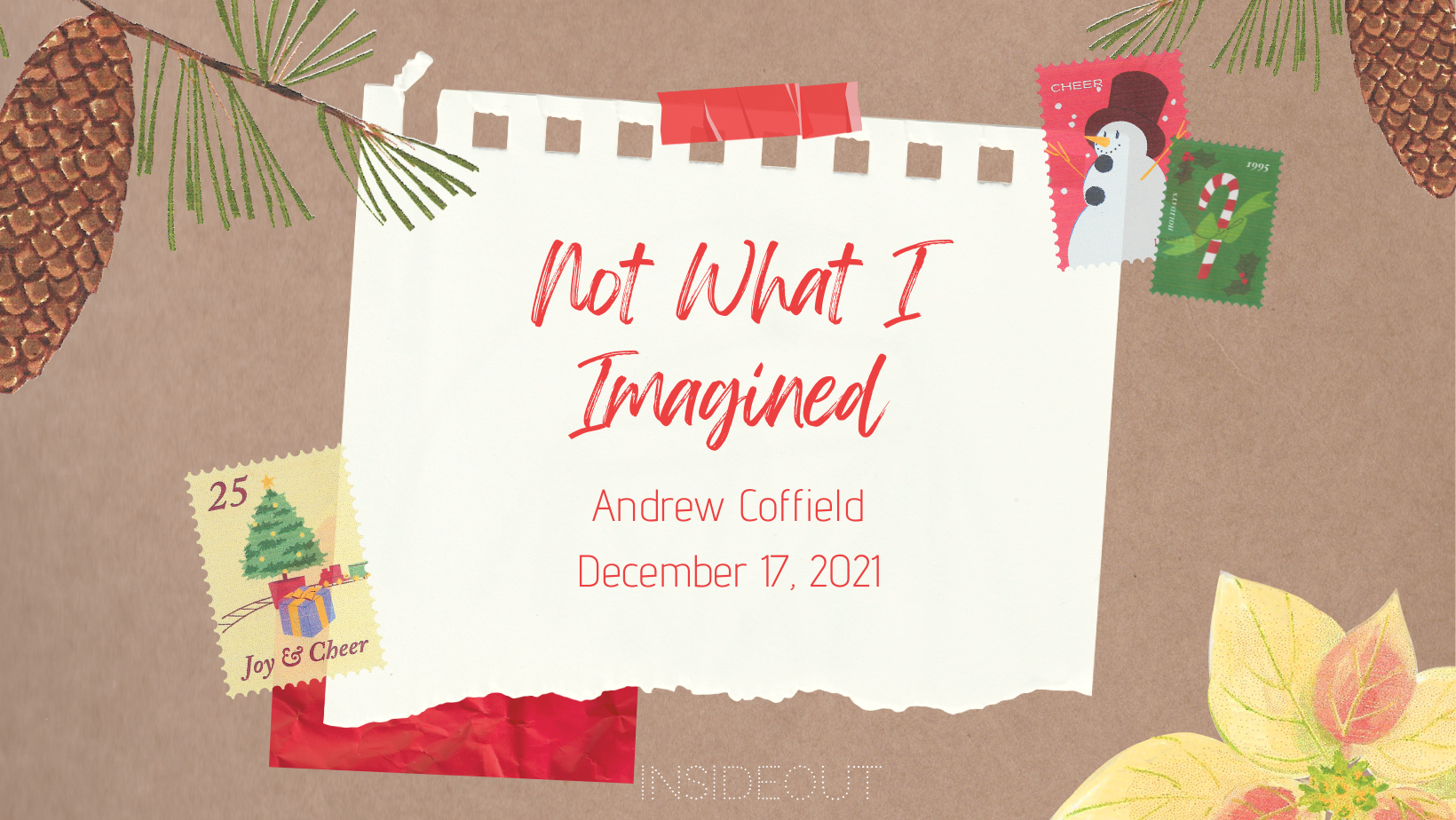 Have you ever had an experience where you walked away telling yourself, “Well, that’s not how I imagined it going”? I would dare say we all tell ourselves this from time to time. Take for example the mindset you carry when walking into a classroom to complete what you expect to be an extremely difficult exam. The class is French or Spanish, and you’re a nervous wreck because it’s already hard enough for you to understand English, let alone a foreign language. As the teacher passes out your exam, you begin thinking to yourself, “I’m going to have to write out full sentences in this language.” The paper then hits your desk, and you glance down to notice that each question is multiple choice. Simultaneously you release a sigh of relief as the question format at least gives you a shot to score high on this test. What you imagined, was not what came to be.

A little over a year ago, my son who was 2 years old at the time, experienced what I would say was probably his first that’s “not what I imagined” moment. Sitting down at our dining room table, he insisted that I draw him a picture of our family. The poor little guy would’ve never made that request if he had the capacity to understand his daddy has the drawing capability of a kindergartener. You know your artistry is awful when your stick figures look like they were drawn by somebody who had their eyes closed. So there I was, drawing stick figures of my wife and I, to which my son exclaims, “Mommy and daddy!” I then reply, “that’s right Carson, great job!” Next, I begin to draw my son in the picture, to which he shouts out, “you!” Now, while reading this it may appear he was referencing me by saying “you!” In reality, he had come to think his name was “you” as we would say things like “you need to eat your food” or “you have to go to bed.” Therefore, I respond to him by saying, “good job, bud, that is you, Carson” (thankfully he no longer refers to himself as “you”).

To finish the picture, I had one last family member to draw, and that member is our 75-pound German Shepherd dog named Juno. As I sketch out what I think is a good-enough illustration of what our dog looks like, I’m waiting to hear him say “baba,” which is what he called her at that time. Instead, all I hear is silence. Looking over at him, he looks noticeably confused. Trying to help him interpret my depiction of our pet that probably looks more like an elephant than a dog, I tell him, “That’s Juno!” He looks at me still bewildered by what is happening, and then he points to the drawing and says “baba?” This wasn’t said as a statement, but more so as a question. It’s as if he was saying, are you sure that’s baba? What was going through his head at that moment, if he could’ve properly articulated what he was feeling is, that’s “not what I imagined.”

What happened in that first example and the subsequent story, and happens to us every day is this: We walk into certain experiences with presumptions. Presumptions are ideas we carry before taking part in something, ideas that are assumed to be true until proven otherwise. In other words, every single day the mind works in such a way that we will imagine what experiences are going to be like, subconsciously painting a picture in our head of what is going to transpire. Then, when what occurs during those experiences varies from what we expected, there is potential for us to be left confused or surprised by what has happened.

It could be that you’re disappointed by how your presumptions never became reality. Opportunities never came your way, or say people turned out to be the opposite of who you hoped they’d be. Looking back at the life of David, imagine how he felt while running for his life, as King Saul sought to kill him. This young shepherd boy more than likely imagined a different scenario for his life at that time after he had defeated Goliath and served in the king’s court. In his mind, he most likely imagined that season of his life being filled with peace and prosperity. Yet, for weeks upon weeks, he would be on the run, in an attempt to survive the king’s wrath. David would still go on to be king, he would go on to live in greater wealth and experience greater victory over his enemies than Saul ever possessed or experienced. Even Jesus came in a way that no one would have imagined, yet it changed the world.

If what you are seeing in your life right now is not what you imagined months or possibly years ago, don’t resort to pointing a finger at God and don’t allow your present disappointment to lead you to an extended time of feeling depressed. Instead, remain faithful to spiritual disciplines that will serve as foundational points God can build off of. Many passages in the book of Psalms are prayers or songs David would pray or sing unto the Lord, all while he was fleeing from Saul. During this season of disappointment, continue to lift your voice unto the Lord. Thank him for his continual presence in your life. That presence, or His Spirit, is what is going to lead you to a season of life where you will be able to say, “This is so much better than anything I could’ve ever imagined!”

admin 2 weeks ago
“Character cannot be developed in ease and quiet. Only through experience of trial and suffering can the soul be strengthened,… Read More

admin 3 weeks ago
In his book, Just Mercy, Bryan Stevenson (lawyer and social justice activist) recalls a memory from his childhood when he… Read More

admin 1 month ago
There were not many people to whom Jesus, in His flesh, said the words, “Follow me.” We know of Peter,… Read More