Drawing From the Past

Posted by: admin in Uncategorized on September 24th

A story to build faith in God is one of David. It has a unique perspective and illustrates how we must never discount things that happen in our lives; they happen for a reason. By and by we will see that reason if we wait long enough.

As a young boy, while tending sheep for his father, Jesse, David once killed a bear and also a lion when they tried to devour the flock. He ever after proclaimed that God had delivered those beasts into his hand. Later on, the memories of those triumphs over the bear and the lion became invaluable to David; and on the strength of those past victories, he was able to draw courage when he faced the giant in his life—Goliath.

First Samuel recounts that Jesse sent David to find out how the battle was going between the Israelites and the Philistines. During a lull in the battle, David stood talking with his elder brothers. Suddenly a champion from the enemy camp swaggered down the mountainside and began to bellow taunts across the valley.

The nine-foot-tall Philistine named Goliath was not only an enemy of the Israelites, but he was also a symbol of their defeat. As this blustering, loud-mouth stood shouting insults and threats; he had King Saul, David’s brothers, and all their fellow warriors cowering behind rocks and trees—shaking in their sandals.

​David was at first stunned and then outraged by the reaction of his fellows. As he surveyed the scene, he was filled with contempt and fierce indignation. How dare this uncircumcised Philistine defy the armies of the living God! And without a second thought for his safety, he spoke up and offered to go to fight this enemy. King Saul tried to placate David, warning that he, a teenager, was no match for this burly, rough-hewn man of war. And when the young boy persisted, Saul tried to get David to at least wear his armor.

​David declined the bulky armor because he remembered the times’ God had given him power over snarling, ferocious beasts. This giant Philistine was just another one in David’s eyes. He drew upon his prior victories, confident that if God did it for him before, He would surely do it again.

​Without a moment’s hesitation, David ran toward the helmeted enemy, his immortal words ringing throughout that valley: “Thou comest to me with a sword, and with a spear, and with a shield: but I come against you in the name of the LORD of hosts, the God of the armies of Israel, whom thou hast defied.” (I Samuel 17:45).

​He twirled the sling, and the lethal stone found its mark in the giant’s forehead. In a stunned hush, the armies from both sides watched as the giant Philistine teetered, eyes glazed, and crashed to the ground. Then David put finality to the problem by cutting the giant’s head off.​

​David won a mighty victory on behalf of the Lord’s army that day. But it was not the stone that felled the giant; it was David’s unwavering faith in the God who had delivered the bear and the lion into his hand in times past. Drawing from his past caused David to look at the giant from a different perspective. Goliath was merely a mortal man defying the living God. That is what caused the young boy to triumph that day. The story of that victory has gone down in history because David had this revelation: “If He did it for me before then I know that He’ll do it again!”

How many times have giants of sickness, disease, disappointment, or even despair come to us with their intimidating arsenal, their taunts of past triumphs? Like Goliath of old, they try to frighten us with their loud taunting: “Do you know who I am? I can crush the life out of you!”  Sometimes those close to us are looking at the situation with natural eyes and will advise us to put on the king’s armor, to use natural or practical ways to defeat the enemy, as though what God has already given us is not enough.

​But don’t we all have past victories from which to draw strength? Think about the prayers God has answered, the many times He has come through just when we thought it was too late. If we will call into remembrance those times when God gave us the victory, then we can stand firm against the new giants that threaten our lives. God will fight for you, just like before.

​Like David, we can take our sling of faith and small stones of past victories and call back to the enemy: “I serve the living God and He is the same yesterday, today, and forever. Because of what He has already done, I come against you in the name of the Lord!”​

​One assurance that we must remember is that God is a very present help in the time of need. If we look at giant problems and impossible situations from God’s perspective, we will realize that the battle has already been won! Be confident that it is God’s will to conquer our enemies. We must get this precept into our minds: If God be for us, who can stand against us? There is no enemy big enough or strong enough to defy the living God! We must polish up those stones of faith, because if He came through in times past, then rest assured that He will do it again. 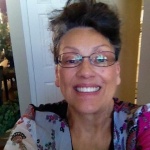 Charlotte Pound is married with two grown children. She and her family currently reside in Jacksonville, AR. where she is the Drama Director and the Children’s Ministry Director.