From Belief to Conviction, Part 2

Posted by: Chad Flowers in Relationships on February 18th

Let me recap part one of this article from December. Earlier generations were taught right is right and wrong is wrong, and many resisted temptations and stood strong for the things they believed. Most of today’s generation have adopted Christianity, not because they have found it to be true and worthy of acceptance but because it seems to be the best option they’ve encountered so far. In today’s culture, believing is made out to be more of a preference based on one’s subjective feelings. For our relationships with God and others to be holy, pure, uplifting, and long-lasting, we can’t be “tossed to and fro and carried about with every wind of doctrine…” (Ephesians 4:14).

To have convictions is to be thoroughly convinced that something is true—“the state of being convinced of error or compelled to admit the truth.” It goes beyond having a personal preference about something to being so thoroughly convinced something is absolutely true you take a stand for it regardless of the consequences. Daniel had convictions so strong he was willing to go to the lion’s den. Shadrach, Meshach, and Abednego were willing to be burned alive for their conviction of only worshiping the one true God and not Nebuchadnezzar’s idol. The apostle Paul was beaten for his faith in Christ; he was stoned and left for dead; he was imprisoned and eventually beheaded. But he said, “For the which cause I also suffer these things: nevertheless I am not ashamed: for I know whom I have believed, and am persuaded that he is able to keep that which I have committed unto him against that day” (II Timothy 1:12).

A certain person in history revealed Himself to us and made an extraordinary truth claim. His name was Jesus. He said, “I am the way, the truth, and the life. No one can come to the Father except through me” (John 14:6). Jesus claimed to be God in the flesh. These are the same facts to which Jesus appealed when He said, “Don’t you believe that I am in the Father and the Father is in me? . . . Or at least believe because of what you have seen me do” (John 14:10-11). Christ wanted His followers to believe in Him for who He claimed to be, so He appealed to the evidence that established He was, in fact, the Messiah. The evidence was and is there to convince our minds that the claims of Christ are objectively true. To move beyond belief to conviction, we must be guided through an examination of the evidences for what we believe.

No matter how thoroughly convincing the evidences are, we still must exercise faith. We will seldom find enough evidence that will remove all possibility of doubt, but we can find sufficient evidence to establish what we believe as credible and objectively true. Life is filled with questions and circumstances that can test our faith and create momentary doubt. The father of the demon-possessed boy described how “often has thrown him both into fire and into the water to destroy him. But if You can do anything, have compassion on us and help us…help my unbelief!” Believing something without evidence is like taking a leap into the dark; faith that is rooted in the truth is like stepping into the light. A faith that is rooted in the truth that we have reason to believe is true will move us beyond believe to convictions in the one true God.

What does this subject have to do with relationships? Your convictions will determine the kinds of friends you associate with and the type of person you will be romantically attracted to. We can’t live life with a fluid belief system, but we must have grounded convictions that guide us. My grandfather, Rev. C.M. Becton, often quoted a poem that summed up his relationship with God and I’d like to share it with you:

“I Met the Master Face to Face” by Lorrie Cline

I had walked life’s way with an easy tread,
Had followed where comforts and pleasures led,
Until one day in a quiet place,
I met the Master face to face.

With station and rank and wealth for my goal,
Much thought for my body but none for my soul,
I had entered to win in life’s mad race,
When I met the Master face to face.

I had built my castles and built them high,
With their domes had pierced the blue of the sky,
I had sworn to rule with an iron mace,
When I met the Master face to face.

I met Him and knew Him and blushed to see,
That His eyes full of sorrow were fixed on me;
And I faltered and fell at His feet that day,
While my castles melted and vanished away.

Melted and vanished, and in their place,
Naught else did I see but the Master’s face.
And I cried aloud, “Oh, make me meek,
To follow the steps of Thy wounded feet.”

My thought is now for the souls of men,
I have lost my life to find it again,
E’er since one day in a quiet place,
I met the Master face to face. 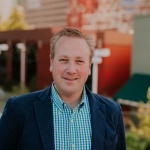