Posted by: Editors Choice in AIM and Missions, Editorials on March 8th

I’m sitting- kneeling rather- at a typical Monday night Hyphen Prayer. I feel God pushing me to pray for my future; not the topic we were collectively praying for. To be honest, I don’t really remember what that topic was. I began to go over the list; future husband, family, children, ministry, opportunities, places… whoa, “places.” That one stopped me. I felt my spirit approaching a still moment knowing God was about to speak. He said, “I have prepared you.” To you, that may seem questionable and very unclear but to me it meant something.

All my life I have felt a burden to pray for many areas of the world, missionaries, and the opportunity to one day minister in places unfamiliar to me. I’ve been drawn to other cultures, photos, and craved knowledge about countries that weren’t “home.” Growing up I prayed so often that God would grant me the opportunity to go on a missions trip. I wanted it to be meaningful and to a place He truly wanted me to go, not just a place that everyone thought was beautiful. In fact, I was sure it would be a place full of beautiful souls, but maybe not so much on the scenery part. I constantly heard Him say “I am preparing you.” I stayed steadfast in my prayer for others who got to travel and minister. I read books about those that have paved the path for Apostolic works overseas and truly learned to trust in God’s timing.

I said “Okay, God. Where do you want me to go?” I knew the few words He had spoken prior to that question meant that missions was in the near future so I was already excited. However, I hadn’t yet felt a specific place He was leading me to or a plan to get there. “Greece,” is the word that came next. I’m thinking in my head, “Yeah that’s funny. Now really, where do you want me to go?” “Greece.” Me again, “yeah, no one is going to believe me. Do we even have Apostolic works there?” Suddenly, tears poured from my eyes knowing my questioning prayers were about to have a tangible answer. I realized something I had waited on for a long time was about to happen.

This summer, I was sharing stories with a friend of mine that is currently involved in missions. He told me how he prayed for God to make connections for him. He asked God very specifically to completely work everything out for him if an opportunity presented was from God. He meant what he prayed and sure enough, God did it all. Every last detail- every last penny- God provided. I wanted that for my life. I knew my life had been building up to this for so long and God truly was preparing me for the battlefield. My prayers got more specific, my fasting increments lasted longer and became more frequent because I wanted His will. It was an urgent prayer request. I spoke with my parents, my pastor, my mentors, and close friends. We were all praying together for open doors to Greece.

Flash forward two days. My parents and I were on our way to Florida, stopping in Mississippi to visit friends and their local church. They anxiously told me they had somebody for me to meet. In all honesty, I thought it was a young preacher they were trying to set me up with because that was a typically funny, yet thoughtful thing they often tried to do. We were on our way to church that Sunday morning in June of 2018 and they told me of a couple, (whew, wasn’t a guy) and suddenly said: “… and they’re missionaries to Greece.” I know what you’re thinking, but the people I was with didn’t know anything about the Word God had spoken to me and confirmed through my Pastor until after they mentioned this. I nearly fell out of the seat inside their car because I was so – as the young kids say these days- “shook.”

This was just the first of many confirmations. Isn’t that just like God? When He speaks, don’t give up on your prayers. I’m here to promote missions, yes, but I am also here to encourage you to be consistent and intentional in your prayer and fasting. He has a plan for you and He has a plan for me. For the next 3 months, it’s in Greece, and I never thought I would say that. 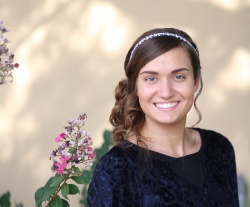 Hannah is 21 years old, lives in Arkansas and attends Calvary Tabernacle of Bentonville. She loves serving in CTKids at her church, baking, thrifting, and enjoying the beautiful natural state during all seasons. She is currently an AIMer to Athens, Greece for 3 months under the supervision of Bro. Joshua and Sis. Christene Moreno.