One Wednesday at Camp

Posted by: admin in Editorials, Inspirational on May 31st

I was so scared to go to youth camp the first time. I was small. They were big. I was weak. They were strong. I knew I was doomed to be pranked, so I stayed home. It was safer there. On the Sunday following camp, one of the teens testified, “Camp was so awesome. We played softball and volleyball and basketball and went swimming and made friends and…uh…oh yeah, we went to church.” One by one, Pastor had the kids who went to camp testify. Each of them reveled in their time there. They all closed their testimonies with, “I can’t wait to go to camp next year.” I decided I wasn’t going to miss it next time. Let them play their pranks. Let them call their names. I was going to camp. And I am forever glad I did.

From that Sunday until this day, I went to camp every year in my teens. I went to camp when I wasn’t even camping. I went to camp some weeks just to work. That’s where my songwriting skills shone. I composed some new songs while mopping the dining hall floor. Some of my favorite selections are “We’ve Come to Mop the Floor,” “Mop It on Down,” and “Amazing Mops.” These songs and more will be available on my latest album.

I made some lifelong friends and some weeklong foes at camp. I even drove a ball to deep left, once. Most of the time, I was just aiming to get the ball past the pitcher. But then there was that Wednesday night in 1996. It was the summer going into my senior year of high school. I still needed God’s guidance to know what I should do with the life He gave me. What college? Career? Calling? I planned to be a Spanish teacher like my Spanish teacher, but if Krispy Kreme was opening applications for a taste tester, I was keeping my options open.

That week’s Wednesday started off like any other normal Wednesday. We played softball. I hit the ball back to the pitcher. Maybe next year.

But that night, I was a big shot. For some reason, the camp staff was short one audio guy. So they asked me to run the monitor mixer on the platform. They trusted me to turn the knobs and push the faders so the singers could hear themselves sing. For one night, I was the monitor mixer monitor. Impressive, I know. It should’ve come with a badge and a concession card, but it didn’t.

After the song service, Pastor Ken Gurley stood up to preach. He announced his text and then his title, “The Dream Peddler.” As he spoke, I was keenly watching the monitor mixer. If he needed more bass or treble, I was his man. I would not disappoint him. I would not desert my post. Let the others pray. Tonight, I would work.

But as he spoke to all of us, God spoke to me. As the preacher made his appeal for senior highers to respond to the call of God, I found myself on the floor weeping and calling out to God. I hope he could hear himself because this monitor mixer monitor was hugging the carpet hearing from God. As I called out to God, God called out to me. And that night, God called me to lay down my dreams for my life to follow His call for my life. That night, God called me to be a preacher.

That night started off like every other night, but it ended like no other night in my life. That night God called me to preach His gospel and reach His people. I’m so glad my friends testified and I’m so glad I went. Little did I know that the course of my life today would be changed all because of one Wednesday; one Wednesday at camp. 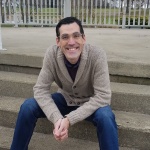