Posted by: admin in Editorials on June 21st

I have always had a fear of rejection. I’m sure the rest of the world can relate. I have the desire to be accepted by society or by the people I’m around. Even with this need for acceptance, if someone asks me about my beliefs, I wouldn’t be afraid to proclaim the gospel. I do not shy away from talking about my Savior. I want others to know I know about God. For a while, sharing my beliefs only seemed to happen if the others asked me first. I wasn’t the type of person to casually bring it up in conversation. I would wait until someone else said something to me.

There were many moments when God tugged on my heart to go talk to someone at work or school. There have even been times where He would lay a certain person on my heart to reach out and encourage. Many times I completely ignored His command. Out of fear of rejection, I set a hungry, broken, or hurting soul aside for the sake of my own comfort.

Matthew 10:14 KJV states, “If a household or city hears your words and not receive it because their hearts are hardened, shake them off from your feet.”

By listening to God when He tells you to speak to a stranger, co-worker, or people at school, you are doing what you’re called to do, whether they accept it or not. I have had many times where I invited a co-worker to church and they told me no, straight up. I have sent a text of my church’s address, hoping and wishing the individual would somewhat appear on a Sunday afternoon, yet they never did. However, as long as we are being obedient to what God has told us to do, God sees your action and honors it. A seed is still being planted within that person, whether we are the ones that see it grow or not. His word says, we plant but God gives the increase.

Even though we wish rejection didn’t exist, we still have to be persistent. Just imagine God sending you to a coffee shop or grocery store and meeting someone who is at their wit’s end, searching for the God we love. You answering His call at that moment could be the reason they come to church and give their life to Him. Isn’t that what we’re here for? Heaven rejoices over just one soul that repents.

As a Christian, one of my main goals is to be sensitive to the voice of God and be bold in every situation I’m in. God orders our steps. Each person we’re around is put in our path for a reason, whether it be temporary or permanent. What kind of people are you around on a daily basis? Do they have a relationship with God or do they know God the way you do? Start thinking about your surroundings. People watch those who love God more than we think they do. When we begin to remember that it’s not about us, but it’s for the glory of the Lord, it’s easier to push back fear, doubt, and the possibility of rejection.

I encourage you today to never forget who you are. Your identity is found in Christ alone and He made you wonderfully. God has never forsaken us nor will He ever. Listen to that tug and follow God’s lead. He knows much more than we ever could. 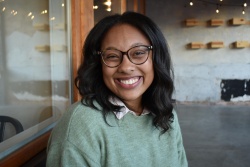 As I was reading my Bible one day, I decided to check out the book of Ezra. At the beginning of this book, King Cyrus of Persia is inspired by God to tell the Israelites to go Judah to rebuild the house of God. In verse three we read: “Who is there among you of all His people? His God is with him, and let him go up to Jerusalem, which is in Judah and build the house of the Lord God of Israel (He is the God), which is in Jerusalem.” When I first read this passage, I couldn’t get this question out of my head. It seemed to just keep repeating itself within my thoughts. “Who is there among you of all His people?”

We are God’s people, we are His children, we are His masterpiece. We are made in His image, we’ve saved by His grace by the baptism in His name as we take on His name. Even though we are all of these amazing things, we cannot stop there. Whenever King Cyrus asked this question, he didn’t just intend for an answer, he asked who is there among God’s children to go and do what He has called us to do.

Sometimes I wonder if we get caught up in how God makes us feel rather than showing those who are searching for what we have they can experience the same. Im talking to myself and I firmly believe that we need our cups filled up in order to pour out but what if we’re never really pouring out? What if we just keep the overwhelming love hidden within our cups?

That doesn’t seem to harm us, right?

The remainder of the scripture asks who would go to Jerusalem and build the house of God. By King Cyrus asking this, it shows that we cannot go and do what God has called us to do by staying in our comfort zone. In this scenario, the comfort zone is Persia. Where we get uncomfortable is Jerusalem. What God wants to do with us requires unfamiliarity, it requires us to step outside of our boxes that are limited, a box that contains insecurity and doubts. We may not think we’re worthy enough to do what God has laid on our hearts but in reality, it was never about us to begin with. As Ezra continues, the people that were captive in Persia now had the chance to worship in Jerusalem through the restoration of the temple. By the Israelites listening to King Cyrus, restoration was possible in Jerusalem.

Who is there among us, the people of God, to obey His call?

If we ever let go of what we cannot do and focus on what God CAN do, we will be led to souls who are thirsting for the love that we have from God. Isaiah 61:1 says, “the Spirit of the Lord is upon me; because the Lord hath anointed me to bring good news to the poor He has sent me to comfort the brokenhearted and to proclaim that captives will be released and prisoners will be freed.”

The Bible also says to be ready in and out of season, meaning we have to be ready to go when He tells us to and we have to obey His word or His commands. I have the ability to get to know God and live with His spirit within me to prove to those that are hopeless or without strength that there is a God that supplies all of our needs. I have this ability to answer Cyrus’s question. If we are constricted by our own restraints, what good does that do for anyone, including ourselves? When Cyrus asked the question, it almost reminded of my pastor saying, “since I can’t go where you go or since I can’t reach those you can reach, will you go for me?”

The Israelites were told to go build the house of the Lord as we are called to do the same, to build upon the foundation it’s already on by witnessing to those around us.

We aren’t all meant to actually build churches or become home missionaries, but we are all called to minister and preach the gospel, according to Matthew 28, but we can build ONTO the house of God we’re already apart of by inviting people to church such as strangers, coworkers, family members, and much more. And even though not every person we invite may say yes, we dust our feet off because we still did what God told us to do.

So when are are asked, “who is there?”, answer with, “me! I’m here!” Instead of sitting back and holding onto the goodness of God when there are broken people around us, we can show them that the voids they have can only be filled with Jesus. If we are so full of His goodness, it should overflow to the lives around us. We have no idea what all God can do through us but we can only learn by allowing Him to do what He wants us to do.

Leah is a 22 years old graduate from Clemson, South Carolina. She has her Bachelors of Science in Psychology. She attends Sanctuary of Praise where she is the Prayer Coordinator for CalledOut Youth and also helps with homeless ministry. She feels as though writing is a different form of art that can reach people if they’re willing to listen