Posted by: admin in Bible Quizzing on January 14th

It’s your last year, Shaleh Dawn, your last year. Take a few chances. Gamble a little. I was talking to myself, trying to force my nervous limbs into quiet submission. But my arms and legs shook, and my mind raced.

The quiz was locked. I was the captain, sitting attentively in the number one spot, my eyes glued onto the quizmaster. He paused, looking intently at the six quizzers at the table. I think he knew there was no way our team could win, and he was sympathizing. When your quiz is locked, there is no way your team will win unless the other team makes a mistake, which is unlikely since they usually stop hitting the buzzer once they’ve locked a quiz. Our team had never won a locked game before, so it felt like our doom was sealed.

When the other team interrupted the next question, I leaned forward. I kind of wanted the quizzer to get it wrong, but I decided a long time ago that I would never pray for anyone to fail. Rather, I followed their answer, picked out mistakes, located the verse, and hoped they did their best. There were many different times I actually prayed for the other team to answer the question correctly.

However, in that quiz, the other team missed, and we won a locked game. It was the first–and last–time I experienced a win on a locked quiz. In preparing for nationals, I spent six hours a day for a whole month reviewing verses. By then, I had them all memorized. I just re-re-reviewed. My locations were solid, and I could quote verses backward (when will that ever come in handy?).

But I’m not competitive. In practice, when someone would contest against me, I would listen. If they were right, and I was wrong, I would admit it. At an extravaganza, when the first night was over and all the other Kansas teams had won a game, I was disheartened. I wished like crazy that I could be competitive. It was after all, my last year. On your last year, you’re supposed to “go out with a bang” (as one quizzer eloquently said at nationals).

But at an actual quiz, in front of the twenty people in the congregation, I would shake like crazy. My mind would say, “You can do it…interrupt.” But question after question, I played it safe. Most people would call me a bad quizzer. I don’t blame them. They think there are two types of quizzers–good and bad. There are actually three types–dedicated, competitive, and dedicated and competitive. The “good” quizzers were dedicated and competitive, but I was only dedicated.

If we rewound six years, we would see a different version of me: a cold, angry girl who had just moved twice in seven months. A girl who thought she was fine and saved. A girl who went to church–still angry at God–because she couldn’t feel Him anymore. A girl jealous of her sisters, hateful toward her parents, filled with fear of irrational proportions, and trapped within her emotions.

But most of all, I was given a new life. 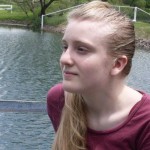 Shaleh Ake is an eighteen-year-old college student. She attends the First Pentecostal Church of Wichita, where she is involved in a multitude of ministries. Since aging out of Bible quizzing, she has become a coach and plans to always be involved in the ministry.