Posted by: Editors Choice in Youth Week on February 13th

The Declaration of Independence. The Bill of Rights. The Gettysburg Address. Roosevelt’s stirring speeches to radio audiences across the United States. Reagan standing before the Berlin Wall.

All of these are stirring masterpieces of both the written and spoken word. To hear them recited or to read them in text form conjures up some of our deepest feelings of what it means to be American. We are what we are because of the greatness of men who were determined to be trailblazers—to carve out a nation that was governed by its own people. At the epicenter of the explosion of our culture and ideals is the refrain of “Life, liberty, and the pursuit of happiness.” Yet, that very pursuit was impossible for a large segment of our culture.

That is, until one man had a dream.

On that hot summer’s day, on August 28, 1963, a man who would become synonymous with freedom ascended the steps of the Lincoln Memorial, and to a crowd of 250,000+, he boldly declared:

I have a dream that my four little children will one day live in a nation where they will be judged not by the color their skin but by the content of their character. I have a dream that one day…little black boys and black girls will be able to join hands with little white boys and white girls as sisters and brothers.

Yes, Dr. Martin Luther King, Jr. dared to dream, and because he did, our nation became stronger! He saw beyond where we are and saw where we could go. He stood against the tide of culture and declared that we can do better. Such is the nature of a dreamer. The question I have for you, though, is this: was it enough for him to simply dream?

If all he did was dream, how different would we be? If all he did was imagine a better place, a better time, what real changes would have transpired? If he kept the dream tucked safely inside his heart and never let it out for America to see, would we still be the land of the free and the home of the brave?

Let’s get real for a moment: some dreams are scary! God-given dreams are often more so. When God gives us a dream, it’s never a call to the status quo; it’s a call to stand up and be counted. It’s a call to go make a difference. He gave Joseph a dream, and that dream drug him out of his homeland, sold him into slavery, and dumped him in a dungeon! Yet, in all of it, God had a plan, and that plan led Joseph to become the savior of his people and the known world.

It’s great to have a dream, but we also have to do something about it! Just like Dr. King, and Joseph long before him, there are steps we must take if we are to see our God-given dreams take flight.

Embrace the dream. The moment the dream was placed in Dr. King’s heart, he had the option to embrace it or push it to the side assuming he was not capable of bringing it to pass. He understood that if he never realized the dream in his lifetime, it was still worth the effort! The dream was bigger than him.

Pursue the dream. Dr. King settled the issue then he got to work! Once you settle in your spirit that God has given you a dream, you have to run after it. The best intentions mean nothing fi they are never put into action.

Refuse to doubt the dream. History is full of terrible tragedies that took place as a direct result of Dr. King’s effort to cause a cultural shift. Similarly, when we set out to accomplish our divine calling, the enemy will quickly present us with as many reasons as possible to give up. But it the dream was from God, we can rest assured that “What he had promised, he was able also to perform (Romans 4:21).”

Experience the dream! Dr. King was persistent in the face of adversity, and because of that, his contemporaries saw sweeping legislation that changed the way of life for minorities in this country forever. If we continue to believe God and pursue our calling against all odds, we can be assured that we WILL experience all He has for us!

Are you ready to take the steps to make your calling your reality? Talk to your youth leader about the free Link247 Series Calling All Dreamers, and get ready to do something with that dream! 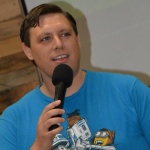 Michael is married to the love of his life, Samantha, and has four wonderful children who give him an excuse to keep playing with Legos. He is currently planting ConnectPoint Apostolic Church in Middleburg, Florida, and serves on the district youth team.