Posted by: Editors Choice in Youth Week on February 2nd

Have you ever had to wait a long time for something special you knew was coming? Most of us are familiar with the excitement that builds up before Christmas. Maybe you couldn’t wait to open that special gift you knew was under the tree. (Hopefully you didn’t sneak a peek.) Maybe it was a family trip. And what kid doesn’t look forward to summer vacation?

It’s always nice when we know the exact day those special moments will arrive. We’ve got them circled on the calendar. The excitement builds with every second that passes. We let out a whoop when they finally arrive. The long-awaited moment is here!

At least four of these special moments occurred in the Book of Acts. These moments are the focus of this year’s youth week lesson series titled, “This Is That.” This series is designed to help you understand how the promised events of the Old Testament become reality as the story of Acts unfolds.

The Promise of the Holy Spirit
As the series title implies, Peter and the disciples of Jesus experienced one of these special moments in Acts 2. Jesus had told them they would receive “the promise of the Father” (Acts 1:4) which would empower them to be His witnesses (Acts 1:8). Jesus also told His followers exactly where (Jerusalem) and when (not many days from now) they could expect to receive this gift.

Ten days later, the big moment arrived. The disciples were filled with the Holy Spirit and spoke in languages they had never learned before. The whole experience prompted Peter to declare, “This is that!” (Acts 2:16). Peter understood what was happening was more than just the realization of a promise made by Jesus: he informed the assembled masses that Joel 2:28-32 was playing out right before their eyes.

The Birth of the Church
At that moment another Old Testament promise also was fulfilled: the church was born. Peter preached a simple sermon, and the church immediately grew from approximately 120 to more than 3,000 believers. The apostles’ work wasn’t finished with a single sermon, of course. For the rest of their lives, Peter and his fellow disciples would have leading roles in the construction of a kingdom that was far greater than any of them could ever imagine.

While growing His church, God was also about to expand His followers’ concept of who could be included in the kingdom He was building. Things soon got uncomfortable for Peter and his fellow Galileans.

A Kingdom for All Cultures
The excitement of Pentecost couldn’t be contained in a single city. Soon, people in faraway cities were receiving the Holy Ghost (Acts 8). Outsiders who didn’t fit the expected profile were being converted (Acts 10). Other faith communities were embracing the message (Acts 19).

All of this occurred despite the inborn prejudices of Peter and his fellow disciples. They hadn’t really understood Jesus’ words when He told them they would be His witnesses “unto the uttermost part of the earth” (Acts 1:8).

Slowly, they started to comprehend that God’s kingdom wasn’t defined by ethnicity or national origin. There was a place for everyone who wanted to be a part—just as prophets such as Isaiah and Jeremiah had predicted long before.

Empowered to Be Witnesses
The rapid growth of God’s church was fueled by the disciples’ single-minded focus on preaching the message of Jesus everywhere they went. Intense persecution couldn’t stop them. Prison wouldn’t shut them up. Their enemies couldn’t beat the faith out of them. These Spirit-empowered followers of Jesus continued to preach His message even as rocks rained on their heads (Acts 7).

These early believers were serious about fulfilling the commission Jesus had given them. They were following the example of their Old Testament counterparts, the prophets, who also experienced persecution, imprisonment, and even execution. But regardless of the opposition, they continued to preach everywhere.

Here’s the best part of the story: we have an opportunity to pick up where the disciples left off. Their day is done. Our moment has arrived.

The same God who gave them power to proclaim His message and build His church has endued us with the same gifts. They were the spiritual heirs of the Old Testament prophets; we are the heirs of the New Testament disciples. 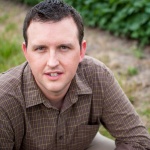 Jonathan Mohr is an old guy trying to keep up with his two children, Nolan (age 9) and Ella (age 6). His greatest desire is to see them become passionate Apostolic students committed to building God’s kingdom. He serves as pastor in Greenfield, Illinois, along with his indispensable wife, Tollie. Jonathan is the author of this year’s youth week material.

You can write for InsideOut!

Acts 2, Jonathan Mohr, NAYC17, This is That, Youth Week