The Commune-ity Meeting: A Look Back

Posted by: General Youth Division in The Commune-ity on August 8th

A record breaking crowd of 450+ student leaders came together in St. Louis this weekend for The Commune-ity Meeting. This conference is the perfect blend of spiritual and practical student ministry. The theme, Panorama, challenged leaders to see the big picture.

The General Youth President, Michael Ensey, greeted the attendees with a keynote address. He challenged them to get a fresh perspective of their ministry. Ensey specified two things that determine your perspective: where you stand and which direction you are heading. Following the keynote, conference goers broke into split sessions with Darin Sargent and Jason West. The night concluded with everyone converging in the final general session with Jonathan Walker. He passionately pleaded with a generation of student leaders to connect to God as the only source of our success.

Friday began with another split session by Johnathan Nazarian and Jonathan Walker where the audience was encouraged to engage and invest in teens. Darin Sargent spoke to the student leaders about doing their part to “Save a Life.” He challenged them to “…be willing to fight battles for young people that others would shy away from.”

Link247 sponsored a networking lunch where leaders had a chance to connect with other attendees. There were some great resources given away, including series packages and an Apostolic Study Bible. The content packed day continued with another split session featuring Angela Harwood, Graylyne Griffin, and a panel group answering registrant submitted questions.

The final general session began with Graylyne Griffin (and team) leading us in worship. Jason West preached the final message of The Commune-ity. In his message titled, “Youth Ministry: Behind the Scenes and Beyond the Hype,” West encouraged student leaders to commit to the process of winning students to God. Beyond the glamour and hype of youth ministry, are we committed to leading a life to God?

If you were unable to attend this year’s conference or want to relive the incredible moments at #TCM14, you can purchase a Dropcard containing audio/video of all the sessions. The Dropcard is available at www.dropcards.com/generalyouthdivision. Make plans now to attend The Commune-ity Meeting in 2016!

Enjoy the tweets and photos from #TCM14 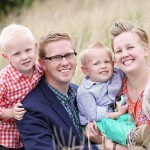 Derek Borders became the Oklahoma District Secretary on March 25, 2011. He and his wife Amanda have two sons, Bryce and Cayden. He is currently serving as the asssistant to the pastor at the Apostolic Worship Center in Norman, Oklahoma and has served as Section Six youth leader very capably in the past few years.