Posted by: admin in Ministry Spotlights on May 11th

I consider myself to be the textbook definition of a nerd. Spend much time around me and you’ll begin to believe so as well. I’m the first one they call at the office when there’s a computer problem, I wear glasses, I’ve been known to wear a black belt with brown shoes, and I own a pocket protector.

Just kidding about the pocket protector. I promise.

While I’m on the subject of definitions, though, I must admit I really get a kick out of looking up words in the dictionary. I know…nerd-overload, but stay with me on this one.

I was studying recently and I was having a hard time finding a word that would truly express the overwhelming love we as Apostolics are supposed to have for Jesus Christ. It’s a love that should not just be something that rumbles under the surface, but rather radiates out of us, making it evident to all with whom we come in contact. Suddenly, it hit me: crazy. So, I looked it up, and here’s what I found:

Yep, that pretty much sums it up!

When I see the word “crazy,” there is one particular figure in the Bible who stands out the most to me: David. Think about it. This guy killed a lion and a bear with nothing but his hands. He killed a giant with a slingshot. I would say that qualifies as “intensely enthusiastic.” These things, however, may not even be the craziest thing he did.

Most of us are aware of the story in II Samuel 6. David went to get the ark of the covenant back from the Philistines, but he did not handle the ark the way the law required. As a result, Uzzah died, and the ark was left at the house of Obededom until David could regroup. When David finally did go back for the ark, he decided they would all go six steps, stop, and sacrifice before proceeding. Sounds like a pretty radical thing for David to do. I found myself wondering how long it would have taken him to bring the ark back to Jerusalem at that rate. So I did the math (nerd that I am), and here’s what I was able to calculate:

Obededom lived in Gath-rimmon, about thirty miles from Jerusalem. If they had walked straight through, it would have taken him about two days at the most to arrive with the ark. However, given the average pace is 2.5 feet, they would have had to stop to sacrifice about 10,560 times. Assuming it took only an hour to stop, sacrifice, worship, and move on, and assuming they set aside eight hours every day to eat and sleep, It would have taken them 660 days, or one year, 9.5 months to complete the journey.

The craziest part to me is this: there is nothing in the law that required the ark to be transported that way. The only requirement is that it be carried by the priests. It was David’s own decision to go above and beyond the minimum requirement.

Imagine all of the lives David must have impacted during this journey! Everyone who saw this sight would have been moved. Everyone who witnessed it would have been touched. Certainly there were moments when David was tired, when he was sick of being around smelly animals, or having blood splattered on his clothes. Surely this was a great inconvenience; however, David was more concerned with bringing honor to God than with being inconvenienced.

Can you imagine what God could do in Apostolic teenagers and young adults in this generation if we let go of the “minimum-required” mindset and got crazy for Jesus? Sure, it’s difficult at times, but it changes the world!

What makes it tough, though, is not everyone shares our enthusiasm. Even David had that problem. When he arrived back in Jerusalem his own wife, Michal, mocked him and called him vain. David didn’t allow that to negatively affect him, though. Rather, his response was, “If you think that was crazy, I’m just getting started!”

So what about you? Are you willing to ignore the “Michals” in your life and allow God to do great things through you? Jesus uses crazy people. Trust the nerd on this one. 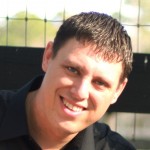 Feature Youth Week Writer Michael currently serves as Youth Pastor for Youth Ablāz Student Ministries in Jacksonville, FL, under the leadership of Pastor John F. Hopkins, III. He is married to the most amazing woman on the planet, Samantha, and has two beautiful daughters, Loretta and Ruby. He’s also an incessant Tweeter, blogger, Apple-stolic, and eater of way too much Taco Bell.