Posted by: admin in 2013, Interviews, Youth Congress on November 30th

Our next interview for NAYC comes from David McGovern of San Diego, California. So, students, It’s my pleasure to introduce you to David McGovern.

InsideOut: If you were stranded on a deserted island, what three items would you want to have with you and why?
David McGovern: Wow. I have so many questions regarding this question? How did I end up on this island? Are we talking a tropical island or an island off the coast of Antarctica? Why three items? And what in the world was I doing in the middle of the ocean to begin with?

I suppose if I have to be there, I’d bring a machete. I don’t even know how to use one, but I want to look cool when they rescue me. 2) A horse. That’s a no brainer—I would use it to travel around my island. Then, when I run out of food…(good thing I asked for a machete). 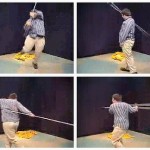 Lastly, I would bring this guy so I could laugh all day every day.

IO: Please tell us your favorite joke.
DM: Three guys walk into a church….You probably should not ask this question to somebody who just spent the past fifteen years of his life doing youth ministry. You’re asking for trouble. Honestly, I’m not a “joke” guy. My sense of humor is more situational—basically most of my laughter is directed at either others or myself. So if I fall off the stage and break my leg while preaching Youth Congress, that would be funny. But if James Maroney falls off the stage and breaks his leg, that would be hilarious!

Oh, before I finish this question, did you all hear about the fire at the circus? It was in tents.

IO: What is the funniest moment you have had while preaching?
DM: Ooohhh boy. I have so many to choose from, but this one stands above the rest. Several years ago, in one of my first teaching series as student pastor in San Diego, I had a spectacularly and gloriously unfortunate night with my vocabulary. I can’t give details in this interview, but my students have never, ever let me live that down. Thanks be to God, who is RICH in mercy, that we were not recording on that particular evening!

More recently, I was preaching the Illinois District teen camp. My voice was completely shot, and on the last night of camp in front of several hundred junior high and high school students (as well as all the parents, pastors, and district officials who showed out in force to the last night of camp), my voice made a squeak not heard since 1991 when I was eleven years old going through puberty. Everybody laughed at me. Good thing my humor is situational, right? We had fun with it. It was awesome.

IO: Why do you feel North American Youth Congress is so important for students to attend?
DM: The voluminous atmosphere at NAYC simply cannot be matched at any other event, conference, concert, or convention in the world. To be saturated for three days in such a spiritually combustible environment with 15,000–20,000 other apostolic students is an experience you simply will never forget. I am reminded of the synergetic principles communicated in Deuteronomy 32:30: “One can chase a thousand, and two can put ten thousand to flight.” If that’s true, then what could 15,000 put to flight?

There’s not a number in our human understanding that could effectively communicate that equation. But I can assure you NAYC is an event that Hell hates with a furious passion, and that fact alone should make you want to be there.

IO: How do you mentally prepare to preach to thousands at Youth Congress?
DM: I have no idea. Honestly, I’m just going to prepare as best as I can, study like crazy, pray a whole lot, and try not to lose my lunch.

IO: What do you feel are your top two personal strengths and weaknesses and why?
JP: Strengths: I was going to say my good looks, but 🙂 I’m a creative individual. I love to create things. Artwork, culture, systems. I am at my best with a blank canvas. My favorite scripture is Revelation 21:5, “And He who sat upon the throne said Behold, I make ALL things new.” Certainly, HE is the one who makes all things new, but He often allows His creation to create. I’m thankful He includes me in the process from time to time.

Another strength would probably be my love for people. “For God so loved the world….” I want to model that 24/7. And more than just saying it, I want to live it out. In the words of DC Talk, love is a verb. Let’s put some action behind our words and be the church on Monday that we say we are on Sunday. I believe we can love our classmates, neighbors, baristas, cities in a way that leads them to Jesus more than a tee shirt or bumper sticker or postcard could ever do.

Weaknesses: I still struggle with my self-image. It’s something I thought I could leave behind after graduating from high school, like the moldy Cheetos in my locker. But I still find myself far too consumed with what I think other people are thinking about me. Which leads to false comparisons, “Am I as good as them? Do I look as good? Do I preach as well?” etc. This really opens the door for all sorts of internal and external issues. It’s something I am daily taking to the foot of Calvary because Christ is more than enough.

I struggle with effective time management. I am an extremely right-brained individual, and I run on inspiration and creativity. For me, inspiration comes mostly late at night, which leads to working and/or studying into the middle of the night. It’s not healthy, and lately I’ve been forcing myself to try to work within normal hours and get a full night’s sleep. Maybe I’m just getting old.

IO: When and where did you receive your calling, and how did you prepare to fulfill it?
DM: I received my calling when I was seven years old. I began to have dreams of being a missionary. I didn’t understand it all, but I talked with my mother about it, and we talked with our pastor about it. At an early age, my pastor Kenneth Fields began equipping me for ministry in his own way. He encouraged me to join Bible quizzing, which I did, and Bible Quizzing truly became the catalyst for ministry in my life.

It’s hard to stray from the call of God when you’re hiding the Word in your heart! When I became a teenager, my youth pastor George Sanchez continued to equip me, and at age fifteen, he asked me to preach my first sermon in a youth service. Shortly after that, Pastor Fields passed away, and our new pastor John Cameron continued to equip me for ministry.

In 2004, I asked the most beautiful woman in the world to be my wife, and God opened the door for us to move to San Diego where we spent seven and a half years in full-time ministry under our pastor and mentors, Darin and Duana Sargent.

For me, fulfilling the call has truly been a result of God placing pastors and mentors in my life—and submitting to those voices. As I mentioned, when I had dreams of being a missionary, I didn’t understand it all, but in 2012, we became North American missionaries to Los Angeles.

IO: What advice do you have for someone feeling a call to any aspect of ministry? What should their next steps be?
Dm: When you hear the call of God, go to your Eli. Read the story of Samuel. God called Samuel four times. The first three times, God was calling out to Samuel from a distance. And all three times, Samuel went to Eli with his call. After the third call, Eli instructed Samuel to answer.

So when God called Samuel the fourth and final time, the Bible says “Then the Lord came and stood there, and called Samuel.” Eli knew when Samuel would be ready to answer the call because He knew when the Lord would come near.
There is a correct chronology to answering the call of God, and God entrusts the Eli in your life with that. If you feel the call of God on your life, go to your pastor. But the caveat is this: Samuel listened to Eli’s instruction. If you go to your pastor with a call to preach, and he tells you to clean toilets, don’t develop a bad attitude. Answer the call of God by submitting to your pastor.

IO: What are your long term goals for ministry and life in general, and what steps do you plan to reach those goals?
DM: Our long-term goal has always been to build a church in Los Angeles. As I mentioned, we are now North American missionaries to Los Angeles. Early in 2012, we met with our district board, they approved us, and in September of 2012, we moved to the L.A. community of Glendale. Our first service was on November 3, 2012. Please keep us in prayer! You can stay up to date at www.angeleschurch.com.

IO: How can the students take the Youth Congress fire to their homes and home churches and keep it burning?
DM: Here’s what I think—you really can’t. You won’t have 15,000 enthusiastic apostolic young people in your service at home on August 11th. But what you can do is go home so radically charred, charged, and changed by the synergetic spiritual fire at NAYC. And after NAYC, you can go back home so fundamentally transformed by this atmosphere that you become the catalyst for revival in your church, student ministry, school, workplace, home, and neighborhood!

Remember, God didn’t call you to win your entire school or city. God called you to win the one. Focus on the one. Share this fire with everyone. And that one will become two, then four, then forty, then a hundred…. 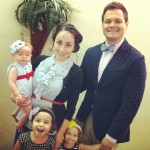