Yes, we’re using the David story again. I can image what you’re thinking, “I already know about David.” My assumption of your thoughts comes from the embarrassing fact that I, too, experienced those words flashing across my mind as I read the subject for this year’s youth week series. David is the role model for every praise and worship leader in Pentecost. He is the example for leaders, servants, and basically anyone. Everyone knows about the little shepherd and the big giant. The whole sling and stones scenario is the staple of any skilled Sunday school teacher’s arsenal. If you’ve even strummed the guitar once with the purpose of playing in church, you will have someone direct you to the “best songwriter in history”. Count on it. When it comes to the church, David can be found everywhere.

As I began to contemplate what I already knew about the man who lived with the heart of God in mind, I began to look at the David behind the triumphs and even beyond the failures. The David some have become desensitized to, myself included. What I found was humbling and challenging. As I began to dig into David’s life, the God he lived for began to shine through every season of the shepherd turned king. David’s life, when you look beyond the songs, the battles, and the famous acts, reveals the greatest lesson we could ever learn as children of God: the beauty of the process.

This series through Link247, sponsored by the GYD’s youth week, touches the vital parts of David’s process in four lessons: The Shepherd, Anointed to Wait, King-Sized Mistakes, and Outward Praise, Inward Worship. We’ve seen these aspects of David on a surface level, but these lessons reveal the purpose behind their place in the process for the king whose legacy and lineage made way for the King of kings. Additionally, you will see how it all matters in your own life.

It’s easy to look over the process when we’re pushing for a certain outcome. That dream, that job, that achievement, or that relationship is the driving force behind every decision. Of course, “…the end of a thing…” is what we’re pushing for, but the next portion of that verse says, “the patient in spirit is better than the proud in spirit” (Ecclesiastes 7:8). It’s not completely about the end, but it’s what we learn in the process; it’s what we become along the journey that is priority with God. He takes us down paths that may not make sense at times, as He did with David. It must have been difficult for David, having been anointed king, to run and hide from Saul. He could have wondered why God was punishing him. Yet that wasn’t God’s purpose at all. God was taking David through a process. A process that would prepare him for the position he would eventually possess.

Looking at life through the eyes of David will aid our daily walk with Jesus and teach us how to better understand the things we go through. David’s story is also an encouraging reminder that God isn’t bound by time or human constraints. If He promised an outcome or gives a dream, it will happen if we conform to His beautiful process. God is faithful, as David proclaimed over and over. That is the goal in our lives as Christians. We must put our faith completely in God, even in His plan for us.

We are living in a time that is surrounded by a host of uncertainties. We never know what tomorrow will bring. If our faith doesn’t rest solely in God, fear will eventually win. However, if we learn how to trust, we will be able to make it through the process and become the person God had in mind when He formed us in the womb. Let it be said of each of us—at the end of our process—as it was said about David: he was a man after God’s own heart and fulfilled God’s will (Acts 13:22). That is the greatest honor to be had. 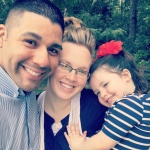 Amberlin is married to Ray Salas, Alabama District youth secretary, and they have one beautiful daughter, Analia. Amberlin has a B.A. in English, writes for Link247, and published her first book #RealTalk in the spring of 2016. Ray and Amberlin serve Lighthouse Pentecostal Church of Greenville, Alabama as youth pastor and music minister.