The Secret I Wish I Learned Sooner

Posted by: Editors Choice in Inspirational on December 11th

When I was eight years old, my parents started a North American Missions (NAM) church in Millersburg, Ohio. For the first four months, our services were held in a school gymnasium before we moved to the church we currently rent. A year later we moved from our hometown of Coshocton, Ohio, to Millersburg. As a nine year old girl, this was quite exciting. A new town, new house, new people. On the flip side, it meant moving away from my friends, family, and the house I grew up in and loved.

When we first moved to Millersburg, I was friends with one girl. That was great, but being homeschooled meant I really didn’t have a place where I was forced to make friends. Also, there were no kids in the neighborhood we moved to so I felt pretty isolated. But I did have my one friend, and looking back now, I’m very grateful for her.

Being a NAM kid comes with some cool opportunities like going to The Apostolic Conference, or TAC. It is a three-day conference for NAM families that is completely paid for by the conference. The youth get to hang out and get their own services during the three days. When my brother and I first heard about it, we were not very happy since neither of us are socially outgoing. We were like “We have to be around a whole bunch of strangers for three days?!” But we went and there I experienced a big breakthrough in my life of friends.

My brother and I ended up meeting a lot of other young people over the three days. That’s when I realized it’s not really that hard to make friends. The secret is simply to talk to people. We went again the next year, and it was great, but these friends all lived in different states so I never really got to see any of them. So, I still had the problem of not having any friends where I lived. I needed friends in Ohio! Then it happened. When I was fourteen, a family from another Apostolic church was on vacation and they showed up at our church. They had a daughter my age, and she had a friend with her. I found that the same secret to making friends at TAC worked in Ohio. I talked to her and we soon became friends.

That next summer I ended up going to camp with her and once again found the secret worked. Just like that, I found myself a part of a group of friends. I realized it’s not that hard to make friends, you just simply need to talk to people. I’m not an outgoing person at all. I would never go up to someone and just start talking, but since moving to Millersburg, I have become better at it even though I am still very quiet.

As a NAM kid, you really are there for everything and you see everything first hand. This can be a “curse” but it can also be a wonderful blessing because you get really close to all types of people. Sometimes your family is the only people you know and sometimes the only people who show up for church on Sunday. With this firsthand knowledge, you do see families who really struggle to just be a family. It has really opened my eyes and caused me to appreciate my family and realize just how “normal” we are. Some advice here: lean on your family.

Over the last eight years I have learned that if you talk with someone, they will most likely talk to you. If you are like me and have to move to a new place and don’t know anyone, talk to people. Go to camps and as many youth events as possible. Don’t seclude yourself and you will most likely find someone in your same situation. In Genesis 2:18, God said it’s not good that man should be alone. I am pretty sure that goes for teenagers too.

At the end of the day I love being a NAM kid and wouldn’t change that about me. Getting to be a NAM kid is a blessing. I just wish I had learned my secret sooner. 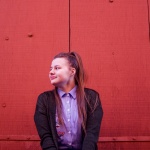 Albany Carpenter is a sixteen year old NAM kid who lives in Millersburg, Ohio. She loves playing the piano in church and working for the kingdom with her family.