That’s My Name – Don’t Wear It Out

Posted by: Editors Choice in Inspirational on October 17th

One thing everyone in the world has in common is all of us have a name. Some may like their names, others may think “What on Earth were my parents thinking?!” Some might hope certain people like their name while some of us don’t care what you call us as long as you “don’t call us late for supper.”

There are about 320 million people in America, but only about 5,200 first names registered. We share our names. My name is fairly common, but I believe I can tell when a specific someone is calling me. “Tiffaaannnyyy!” I can recognize my common name from a familiar voice. Having two sisters, my mother would call each of us the wrong name—all the time. She literally went so low as calling us the dog’s name one time!

We say, “What’s in a name? That which we call a rose by any other name would smell as sweet”. Does your name really define you? Whether unique or common, your name is your name. And the cool thing about God is that He knows you on a first name basis. You see, I relate to Samuel, and maybe you do too. In our youth, we’re kind of unsure what God’s voice really sounds like.

Samuel kept mistaking God’s voice for Eli’s. (That’s a good thing when your elder’s voice can be mistaken for God’s)! It’s a wonderful thing to be Apostolic where the words of our preachers and leaders align with God’s word, the Word. Eli finally figured out the kid wasn’t crazy and recognized it was the voice of God calling him. You see Eli didn’t hear the voice, only Samuel did. Don’t think just because someone else doesn’t hear God’s voice, He didn’t call you. You’re the only one in the world that can hear for you. Pastors and leaders can advise; God can give words of prophecy, but we can’t forget we’re on a first name basis. God will talk to you about yourself more than He will talk to others about you. Eli showed Samuel what to do by advising him to respond to the voice. That’s what your pastors and youth leaders are trying to do. They can show you, but in the end only you can hear God’s voice for yourself and respond.

You see, God calls your name to change it, to change you. Paul became Saul, Abram to Abraham, and Sarai to Sarah. Jacob wrestled for his name change. His name meant something he didn’t want to be. There will be times we need to realize our need for change. And we respond with, “God, rid me of myself. I’m not leaving until you change me.” Jacob (deceiver) became Israel (he who prevails with God). Prevail is defined as “to prove more powerful than opposing forces.” When we allow our name to be called, and we respond and are changed, we can prevail against all opposing forces! When you’re called, you’ll never be the same, but you reap the benefits only when you respond. Samuel didn’t get all God had for him until he responded. Until he did, God just kept calling his name.

We know we’re on a first name basis with God. But could He call your name and you feel comfortable with that? If a stranger calls me Tiff, I’m like “Excuse me. Who are you?” But when a family member or a friend says, “Hey Tiff,” I don’t think twice. But that only happens because I have a relationship with them. God has called each of us enough times for us to recognize His voice. The question is how many times must He call you before you respond?

Have you ever tried to get someone’s attention who is texting?! “Hello?! I’ve been calling your name for five minutes!” With distractions, we can be deaf to His voice. What are we letting shut down our spiritual ears to the point we can’t hear our names being called?

The world is out trying to make a name for themselves, but their names will fade. Our kids are going to say, who is One Direction?! Taylor Swift?! Justin who?! There’s only one name that has never and will never pass away. If you really want to make a lasting impact in this world, all you need is THE name to know your name.

We Apostolics all know the name Peter. He’s the guy who preached the Day of Pentecost message. Yeah. But did you know Peter is also known as Simon Peter? Simon means “he has heard”. Peter had a special gifting, a passion, and a willingness to be used of God, but it all started with him listening. Because Simon first heard the voice of the Lord and responded with his life, he is forever known as Peter (rock). And Jesus used Peter to help build His church (Matthew 16:18).

See God doesn’t necessarily call you by your last name. That means it doesn’t matter who your daddy is or, ladies, if and whom you’ll marry. He calls you by your first name. God doesn’t call you by names others have pinned on you, how others perceive you, or stereotypes they’ve given you. He’s calling. Will you see what else he has to say? How many times must God call you before you respond? Our reply should be, “Yes Lord, that’s my name! Don’t wear it out. Because there’s no need to; I’m responding now.” 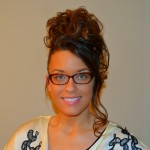 Tiffany Huba hails from Tallahassee, Florida where Dan Huba is her pastor. Tiffany is also a contributor on ApostolicGirl.com.