I love it when a scripture I have read for years jumps off the pages and grips me in a brand new way. On an ordinary day I began to dig deep into the story of a man that changed the way sinners receive grace. I had one of those moments recently that make you pause and re-evaluate your entire way of thinking.

He was of man of integrity, yet corruption. He was undervalued in the eyes of man, but in the eyes of God he was more than strong enough. This musician and poet was not first pick among his brothers, but he was the one anointed to be king. He was a shepherd turned ruler, one with giant sized faith; a mighty warrior yet—in all of his humanity—made significant mistakes. David was not perfect, but he was someone who walked closely with his Master, and even in seasons of running, he was a man who chased after the right thing.

“And when he had removed him, he raised up David to be their king, of whom he testified and said, ‘I have found in David the son of Jesse a man after my heart, who will do all my will’” (Acts 13:22, ESV).

I have always interpreted the verses associated with David as portraying him as a man favored of the Lord, faithful, and humble or perhaps who acted in ways that were like Christ. He was a man who in ways mimicked God, but what if there is more to this? If you were to look up the word “after” in a dictionary, you would find many definitions, two of which are applicable to our story.

after: in imitation of or in pursuit or search of; with desire for

He was a man after God’s heart, meaning he not only was “in imitation of” Him, but he was actively and fiercely seeking Him. David is one of the most well known characters in the Bible. If you have ever read the first chapters of Matthew for more than just the Christmas story, you would also know that in all the seemingly boring “begat” verses, Jesus actually came from the very lineage of David!

This king was specifically selected of God because his priorities were in the right place. Whether he was shepherding sheep or the people of Israel, he did it unto the Lord. More than that, he was chasing after what mattered most. He did not always get it right, but when he fell short, he picked up the pieces and began running again toward the prize. He was earnestly pursuing what was most important, so much so the Savior of the world took notice. David had no ulterior motive; he was chasing. Plain and simple. He knew that what was before him was worth all of his time, effort, love, trust, and even life.

Similar to this king of Israel, we can learn a lot from Mary in the book of Luke. Like David, she was after that one needful thing. Her sister Martha was distracted with serving and getting everything right in order to please Jesus. She wanted Him to be proud of her and observe all the work she was accomplishing. Mary, however, simply sat right there, without a care in the whole world at the feet of her Jesus. She had discarded security, worry, and schedule and was solely following His heart. Soaking in all she could because nothing was or will ever be more important. That day was easy, but every day isn’t quiet and calm. Sometimes finding Jesus in the commonplace poses a challenge for some. Even in times like these, we must keep chasing after Him. Faith is part of the race.

Just before her living room learning session with the Master, we see such a dramatic contrast of emotions. In John chapter eleven, Mary fell at the feet of Jesus a first time following the death of her brother, weary with questioning instead of trust and devotion. The same feet she fell at with questions and confusion are the same ones she sat before in awe of His goodness and glory.

“Then said Jesus unto them plainly, Lazarus is dead. And I am glad for your sakes that I was not there, to the intent ye may believe; nevertheless let us go unto him. Then when Mary was come where Jesus was, and saw him, she fell down at his feet, saying unto him, Lord, if thou hadst been here, my brother had not died. When Jesus therefore saw her weeping, and the Jews also weeping which came with her, he groaned in the spirit, and was troubled. And said, Where have ye laid him? They said unto him, Lord, come and see. Jesus wept” (John 11:14-15, 32-35, King James 2000 Bible).

Mary didn’t realize that He delayed His response to display His glory and power and even build their faith. It took something as seemingly impossible as raising the dead to get her off the ground and walking in the right direction. Maybe it was the confidence built in Mary through such a trial that made her devotion to Jesus so deep and untouchable. Perhaps it was the failures followed by forgiveness that made David realize he had no other calling greater than walking with God.

David and Mary are both outstanding examples of what God can do through something who is broken and despised of the world. That alone is a significant matter to consider, but above all that, we can also see what complete devotion and total abandon to Christ looks like.

It is not about what we can receive from God, though blessings do come. It is not about who knows your name or what accolades you receive here on Earth. Our purpose is to chase Him, chase His heart, His very being with relentless pursuit and bring as many people with us as possible.

Faith isn’t faith when there are answers and road maps in front of you. It is every day pressing forward to our Savior, the One who gave His very life for you, even when you don’t know every answer. He is the prize. He is the goal. Everything we say and do should point back to Him and help walk another one of His children home. The race isn’t to the swift, but to the constant. Run with patience after the heart of Jesus, no matter how hard the road gets, and remember who is waiting for you at the Heavenly finish line.

“Therefore seeing we also are surrounded with so great a cloud of witnesses, let us lay aside every weight, and the sin which does so easily ensnare us, and let us run with patience the race that is set before us, Looking unto Jesus the author and finisher of our faith” (Hebrews 12:1-2, King James 2000 Bible). 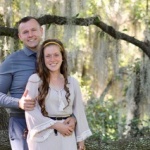 Rachel Skirvin is a lover of travel, nachos and the gospel. She is a graduate of Urshan College and will most likely always call it Gateway. She just recently married her best friend and together they are serving at the Pentecostals of Cooper City in South Florida.