Posted by: Editors Choice in 2017, Inspirational, Project 7 on November 27th

“Let no man despise thy youth; but be thou an example of the believers, in word, in conversation, in charity, in spirit, in faith, in purity” (I Timothy 4:12).

Wow! That’s the only way to express my emotions about how NAYC was for those who attended. I was so blessed by the music, singing, preaching, and powerful moves of God’s Spirit we experienced every night!

With over 34,000 in attendance partially filling Lucas Oil Stadium, it was like never before. What sticks in my mind most about NAYC is the overwhelming response from the youth with their worship and participation in every part of the service. From the first song sung to the last word preached and throughout the entire altar call, they showed more than ever that they were passionate and wholeheartedly dedicated to a move of God in their lives. I believe youth went home inspired and motivated to do something for the kingdom of God.

As a youth pastor I am amazed when I think back to my first NAYC experience in 2013. Never having attended NAYC before, I wasn’t sure what to expect. We had thirty attending—the most we had ever brought as a church. I came expecting to receive something from God, but my wife’s and my primary focus and responsibility were to make sure all the youth were taken care of and their needs met. At the first service, the General Youth Division launched a new ministry called P7.

I remember watching the promo video and being inspired by it, wishing P7 was something I had when I was in high school. I remember thinking I surely would have started a P7 club in my school. As a teenager I was known as the “preacher boy” who carried his Bible throughout the hallways and corridors of the local middle and high schools. It wasn’t uncommon for me to be stopped in the halls or asked a question in class about God or the Bible. At the same time, something told me it would not be something my youth group would participate in.

As the days of NAYC went on, we found ourselves refocusing on the needs of the students, making sure they were active in the services, praying with them in the altars, and being there in whatever way they needed us. By the time we got home I had nearly forgotten about the new P7 ministry. I went back to work fulfilling my ministry responsibilities as husband, father, and youth pastor.

But as the days and weeks after NAYC went on, I couldn’t help but remember those P7 presentations. Day after day God began to deal with my heart about what I had seen and began asking me, “What could your youth do in their schools?” At first I had my questions and doubts about who could do it and wondered if we had the potential in our youth group, but day after day God dealt with me and I knew what I had heard and seen at NAYC was not just something interesting or a good idea for someone else’s youth group. God wanted to use our local youth group in our schools.

Months later I spoke the vision to our students about starting a P7 club in their school. When I spoke about it I sent forth a call and challenge to anyone who wanted to make a difference, anyone who wanted to be used by God. We were so blessed when out of the shadows of our youth group stepped a young lady whose parents were never in church. She rode the church bus as her weekly transportation. She didn’t sing in the choir; she lived on one of the worst sides of town; most people would have overlooked and disregarded her. But she stepped up to say she wanted to teach P7.

This young high school junior started the next semester and went on to build a strong P7 club in her local high school that went on for two years. She and a couple others were the only Apostolic witnesses in that school. When this one relatively unknown young lady stepped up and stepped out, she inspired another group of four young high schoolers to start another P7 club the next year elsewhere in the community that has been going on now for three years.

God used my first NAYC experience to not only bless me but to inspire me to challenge our young people to do something I never thought they were capable of. We youth leaders should step back and really think about how much potential really exists in our youth groups. How many world changers do we actually have sitting in our youth services? Who are we leading right now who may be the next young person to affect their school, their community, their church, their homes? It’s so important that we do not despise or look down upon the potential sitting in our own youth groups. Before NAYC 2013 I had put my own limitations on what our young people could accomplish, but now I see what they could be, not just what they are today.

I know sometimes it’s hard to recognize the greatness we rub shoulders with every day in our youth groups. If we really think about it, few people would have thought years ago that we would turn out to be the leaders God has made us. Very few people who saw me twenty years ago as I stepped off the church bus in my highwater pants, untucked shirt, and hand-me-down shoes would have thought I would be a youth pastor and licensed minister today. But thanks be to God someone in a Sunday school class didn’t see what I was; they saw what I could be.

So let’s look deeper than the surface when we are evaluating our young people. Men may look on the outward appearance, but God looks on the heart. 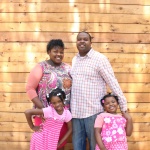