Posted by: Eric Edwards in Hyphen, Inspirational on March 17th

A recent study by Barna Group showed that six out of every ten young adults hold and believe in an individualistic approach to morality. Simply stated, morality is a personal choice, entirely a matter of individual decision. Moral rights and wrongs are essentially matters of individual opinions in the view of today’s millennials.

Young adults today are consistently bombarded with a cultural stigma of defining morality, moral beliefs, and moral reasoning. They are demanded at times to defend or debunk sources of rights and wrongs and are often berated if that view doesn’t fit what is considered to be in the boundaries of social norms. As a result, whenever we begin to discuss moral issues with our friends, co-workers, or fellow students, we often discover how unprepared people are in general to have convincing and coherent moral reasoning.

A key conceptual confusion on this point revolves around the meaning of the statement that “an individual has to decide for themselves what is true (moral).” This reasoning brings about two different outlooks on how we determine what is to be true. First, moral realism deals with a person understanding and declaring a reasoning of an objective moral fact. The second, which leans towards moral relativism, has to do with the mental construction of what is treated by someone as a moral fact when it may not be one. Therefore in this world of moral individualism, anyone can seem to hold their own convictions about morality, however they’d better also keep those views private.

Giving voice to one’s own moral views at times is itself nearly immoral.

By cultural standards, morality is ultimately a matter of personal opinion. It is wrong to render moral judgments of the moral beliefs and behaviors of other people. Everyone should tolerate everyone else, take care of their own business, and hopefully get along. This generation has been deduced as trying to define what is right and wrong in our own eyes, however, the millennial generation really isn’t that much different from the very first generation.

“For God doth know that in the day ye eat thereof, then your eyes shall be opened, and ye shall be as gods, knowing good and evil” ( Genesis 3:5). Adam and Eve tried to take something that belonged only to God—the power to decide good and evil—which is the very same thing our culture is still trying to take from God. Sadly, whenever humanity tries to take into their own hands what is reserved exclusively for God, disastrous results occur. Culture changes, but covenants do not. Humanity left to his own philosophy and reasoning will always be morally adrift because we’re trying to control something we were never designed or given power to do. Rely on the Word that has been forever settled.

“Trust in the LORD with all thine heart; and lean not unto thine own understanding. In all thy ways acknowledge him, and he shall direct thy paths. Be not wise in thine own eyes: fear the LORD, and depart from evil” (Proverbs 3:5-7). 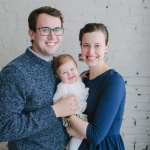 Eric is married to his best friend, Rachel, and has one little girl, Evelyn Rose. Together they serve as the young adult pastors at New Life Christian Center in Lancaster, Ohio. He enjoys being outdoors and adding to his collection of books.