Let No Man Despise Your Youth

Posted by: Editors Choice in Inspirational on September 27th

Many times in my life people have tried to convince me that I am too young. That I am too young to encourage others, too young for God to use, and too young for God to call. But God called me at eleven years old, and people close to me actually told me it was all ‘’dreams, emotions, kid stuff, and I would eventually ‘get over it.’” Yeah right. But when people say things about me being too young—and it kind of dampens my spirits—I am reminded of I Timothy 4:12 which reads, “Let no man despise thy youth, but be thou an example of the believers, in word, in conversation, in charity, in spirit, in faith, in purity”.

Both you and I are here to be examples—even as young people. We are placed on this Earth to be an example to young and old alike. Don’t tell me you’re too young for God to use. You’re not! My generation, the “Millennial” generation, of youth who are true, Jesus-loving examples to this dying world have something the youth of this messed up world desperately need. You’re not too young to reach them. You’re not too young to minister, encourage, pray, and cast vision. Don’t ever let someone put you down because you’re “too young”.

In a generation just one or two before me, there were people God used mightily who were younger than I am right now. My grandfather collects all of the Pentecostal Herald magazines. Just a couple of days ago, I was looking through a couple of them when a particular article caught my attention. It talked about the value of youth and mentioned a couple of elders in our movement whom God called and used at a very young age. Some have already gone on to be with the Lord.

These are just a few of the many God-called young people who helped spread the Word. We continue to build today upon the foundation they laid years ago. I pray my generation will be the generation that starts that all over again. It can happen. My generation needs to rise up and be the next generation of James Kilgores, Nona Freemans, Vesta Manguns, and Kenneth Haneys. Why not?

We’re not too young! We’re not too young to start right now. It is okay to let God use you. If God has called you, He obviously knew you weren’t too young, and He wants to use you. And when we become that generation, we’ll start seeing things like their generation saw—things we’ve never seen before! I honestly believe those elders saw God move in the way He did because they decided at a young age to allow God to move through them any way He saw fit.

I don’t know about you, dear reader, but I most definitely desire that move in my life. And I hope that you do as well. We’re not too young. I’m not, and neither are you. I don’t care if you’re twelve or twenty-five. If you have never had God move, ask Him to. He will! Don’t despise your youth. The word “despise” is described as “to regard with contempt, disgust, or disdain.” Why would you want to despise your age when you are so valuable and so worth it? God doesn’t care about your age—He cares whether you’re willing. If you are old enough to speak, you are old enough for God to use. We are just the right age to be reaching our world.

So don’t despise, disguise, or deemphasize your youth because God can use your youthfulness to do great things for Him! 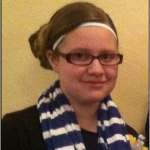 My name is Bethany, and I’m fifteen. I love Jesus, reading, writing, and encouraging others. I have a passion for music and missions. Currently, I live in Wisconsin, where my family and I are church planters.