It All Happened at a Church Camp

Posted by: Editors Choice in Inspirational on May 30th

“One more pair of heels—just in case!” As I scrambled about my room, tossing one skirt after another into my suitcase, my mind frantically raced in a last minute preparation. In less than ten minutes, I would be heading up to the ole’ campgrounds where I would spend yet another week of my summer at church.

But this was not just any week of church camp; it was my last week. Having just graduated from high school and being an upcoming freshman in a local college, this would be my last year to grace the campgrounds as an official camper. I loaded my small amount of luggage (four very large suitcases and a duffle bag) into the trunk and clicked my seatbelt into place. As we drove, I began to think back to exactly what church camp has truly meant to me.

As soon as I reached the required age for camp, I was fired up and ready to go! I was excited for a week of “freedom,” away from my house to spend with my best friends on an Apostolic campground—it was going to be the greatest week of my life! However, by the third day of waking up at 7 a.m., I was ready to get as far from the camp dorms as physically possible. I was tired. I was cranky. I wanted to go home.

But then, Thursday night happened. You see, every Thursday night at Ohio’s youth camp, we have a night of consecration. In these few hours after the evening service has ended and all the parents have gone home, the campers are assembled into the Tabernacle for a night that will define our summers. We are split into small groups and asked a series of intimate questions about our relationship with God.

“Do you feel like God has called you to a specific ministry or calling?” “What exactly is holding you back?” “Are you currently living in the will of God?” After discussing each of these questions, we were given a blank sheet of paper. On this paper, we were told to write down the things we wanted to consecrate—or give over—to God.

I believe at the young age of eight, the two words I wrote on that paper were “my life.” At that time, I didn’t exactly know what I wanted or even needed to give over to God. But as the years progressed and Thursday night consecration came by yet again, I found myself becoming more and more detailed in what I wrote down. The more camps I experienced and the more years I lived, the more my eyes were opened up to the very nature of God.

In my short eighteen years of summer, ten of them have been devoted to church camp. Those five days in a stuffed dorm with the blistering July sun raging down were honestly the best days of my life. Whenever the month of June would begin to peak its head through the spring air, my heart would race with excitement. Church camp was almost here!

I looked forward to the nights where I would stay up talking with my friends until the early hours of the morning. I looked forward to the amazing Italian subs concessions would sell after church, the weird and wacky talents that would be performed at Wednesday night’s talent show, the funny pranks the camp staff would play on each other, and the afternoons of playing softball during rec-time (or rather sitting and admiring all the cute boys playing softball).

But I also looked forward to the services; to the moments when I knew my heart would be broken and shaped by the omnipotent Creator. Every year, on my way up to camp, I would say the words “I wonder what God will do this year!” And every year, He showed up and showed out.

Though my years of camping are over, my feet still walk the hallowed grounds. Every year I go up to fix the young girls’ hair for night church and stay to watch them experience exactly what I did when I was their age. I watch as they walk up to an altar with their hands raised and give their life over to God yet again. I watch as innocent tears fall down their cheeks as their lives are changed forever in an old tabernacle. I see the smiles on their faces as they experience what a holy God can do on a sacred campground.

Yes, my years of camping may be through, but I have learned this: you can take the girl out of the camp—but you will never take the camp out of the girl. 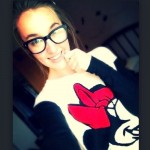 I am a current college student at Ohio University of Lancaster and attend New Life Christian Center where Gary Keller is my pastor. I’m an active member of ThePlug (a young adult ministry) and serve on the creative team as well as lead two sign teams, Mighty Hands of Praise and SELAH.