Posted by: Editors Choice in Inspirational on November 29th

The following is an adaption of a speech given by Hannah Loyd to her eighth grade class.

Why do you wear skirts all the time? Aren’t your legs cold? How long is your hair? I have been asked these questions—plus many more—countless times over the years. I’m sure many of you in this class have asked me at least one of these questions before, and for those of you who haven’t asked but may be secretly curious, I hope to provide you with some answers today.

As many of you may know, I am of the Pentecostal religious denomination. Although there may be just a few Pentecostals in this school and town, according to the United Pentecostal Church International website (UPCI.org), there are over three million United Pentecostal Church members like me worldwide and over 279 million Pentecostals in various denominations. I’m thankful to say my family is among these members. Both sides of my family have been Pentecostal for many years, making me a sixth-generation Pentecostal. My dad currently pastors our church in Vienna, and my grandfather pastored before him. My great-grandfather pastored the UPCI church in Ozark, Illinois.

So what does it mean to be Pentecostal? Webster’s Dictionary defines a Pentecostal as someone who emphasizes the activity of the Holy Spirit, stresses holiness of living, and expresses their religious feelings uninhibitedly. However, the only definition of a Pentecostal many students have here is just of me, and it’s most likely just based on the way I look on the outside.

Although part of being a Pentecostal relates to how I dress on the outside, allow me to explain the biblical principles on which my outward appearance is based. To answer the question about the way I dress, I would like to quote a scripture from the Bible where the distinction of sexes is based. It is found in Deuteronomy 22:5 and states, “The woman shall not wear that which pertaineth unto a man, neither shall a man put on a woman’s garment: for all that do so are abomination unto the LORD thy God.”

God has always desired a distinction between male and female, not only in the way we look but also in our talk, actions, and behavior. Before the early 1940s, it was difficult to find a woman not wearing a skirt or dress. World War I, along with the feminist movement, brought along the acceptance of women wearing men’s apparel. Even in department stores today you will not find a dress or skirt in the men’s department. Public restroom signs worldwide indicate which restroom is for women and which is for men. I, as a Pentecostal, still believe God’s desire for women not to wear men’s apparel holds true today, and this is why I have made the choice in my life not to wear men’s apparel.

I’m also asked often about my hair. How long is it? Why haven’t I cut it? My reason for this is also based on a principle found in the Bible in I Corinthians 11:15. It reads, “But if a woman have long hair, it is a glory to her: for her hair is given her for a covering.” In this chapter the apostle Paul was teaching the church at Corinth God’s order for the family. For a women to cut her hair was to dishonor the authority God placed in her life. It would be an act of rebellion. As Paul concludes in verse 15, a woman’s hair is given to her for her glory. I’ve often been complimented on my hair as being beautiful, and it is often said by men that they prefer their wives or girlfriends to have long hair because of its beauty. The reason I keep my hair uncut is because I want to submit myself to the authority God has placed in my life and to please Him. According to His Word, I believe my long hair gives me favor and power with God.

Being Pentecostal is more than the outward experience I have described so far; it is so much more than wearing skirts, having long hair, and even not wearing makeup. To say you are Pentecostal means you have experienced the Spirit of God in the same way it was given on the Day of Pentecost in the Book of Acts in the Bible. On the Day of Pentecost, God poured out His Spirit to 120 believers who gathered together praying for this promise. In each instance where the Holy Spirit was given in the Bible, speaking in tongues was the evidence of receiving it. In Pentecostal churches—and even other denominations today that believe in this experience—speaking in tongues is the norm when we experience the Spirit of God. This belief in the Holy Spirit with the evidence of speaking in tongues is also what sets apart the Pentecostal movement from many other denominations.

Unfortunately, many people just define Pentecost by a list of dos and don’ts, but it is an experience and a lifestyle. I would like to share a short clip with you. This song called, “I’m a Pentecostal” performed by Christian Life College, a Bible college in Stockton, California, demonstrates the way we worship and how we feel. Listen to the lyrics as they describe Pentecostals.

At this point, some of you may be thinking we are totally insane and crazy. If I were seeing this for the first time, I would totally agree with you, but this is what it is like at my church and at many of our conferences and conventions. This expression of worship is life-changing and very important to me, and like I said before, it is an experience.

It’s easy to see how we could be judged. Everyone is always being judged no matter one’s religion, race, or background. I’m sure many of you here have been misjudged based on your looks or actions, and throughout my life, I too have often been misjudged. I do the things I do to please God. We may wear things differently or act differently, but when it comes down to it, it’s important that we stand up for what we believe. At times we may all be discouraged from being our own person out of fear of being judged, but take me as an example: I’m thankful to be Pentecostal. I don’t see these sacrifices as holding me back from things I would like to do, but I see them as opportunities to tell others about what I stand for, just as I’m doing today.

I hope sharing some of my personal views and ideals has helped answer some of the many questions about me and my lifestyle. Thank you. 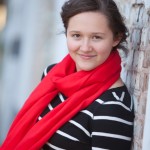 Hannah Loyd is a freshman and proud Pentecostal at Vienna High School in Vienna, Illinois. She is class president, a member of the National Beta Club, and Fellowship of Christian Athletes and participates in Pep Club and Scholar Bowl. She loves music, drama, and hanging out with friends and family. Her Dad pastors Shawnee Worsip Center in beautiful southern Illinois, and her desire and future goal is to be involved in student ministries.