Posted by: Editors Choice in Inspirational on November 28th

In today’s society, it seems like everything is acceptable; everything besides being a Christian. Our freedom of speech is rapidly becoming less and less free. The world tells us everyone can do whatever they want to do and be whatever they want to be. As born again believers, we know that could not be farther from the truth. Here’s the reality staring Apostolics in the face: we have the answer. We have a hope within us that can conquer every problem, every fear, and every pain we may experience in this life. The question we must ask ourselves is, “What am I going to do about it?”

A passage of scripture frequently quoted within the church comes from Matthew 22:14. This scripture states, “For many are called, but few are chosen.” In the Greek culture, a calling was known as an invitation to eternal salvation. Everyone could obtain this hope that was being talked about, but not everyone was chosen. Likewise, chosen had a special meaning as well. The chosen were people hand-picked by God, also known as His “elect” people. God gave the chosen the special responsibility to do His work in the Kingdom. The disciples and the apostles were both chosen for a specific time and a specific purpose. God’s chosen vessels are woven throughout Scripture; one of which is the story of Esther.

The story of Esther tells us God’s sovereign hand always works through His chosen people. God chose Esther to mobilize a nation by giving her favor with the king. Esther was a little Jewish girl from the ghetto, but God chose her to be the queen. God calls us when we are broken, but He sees us as we are chosen. Esther’s dilemma came from having to make a hard decision. Esther stayed in the palace for at least a year before she heard of Haman’s wicked plot to kill the Jews. She grew comfortable with the palace lifestyle. She had everything she could ever need or want in the palace. She rose from poverty to riches overnight, and that must have been nice.

Unfortunately, this generation is also comfortable in the palace. We want to blend in at school and work because it is more comfortable that way. We attend camps, HYCs, and Hyphen retreats determining we are no longer okay with complacency and comfort, yet nothing truly changes. Why can we not truly give our hearts to the work of the Kingdom? The issue stems from most of us continuing to operate in the “called” mentality when we are really chosen. In Esther 4:11, readers see how hesitant Esther is to go before the king because she had not been called to do so.

In this last day generation, we need Apostolic Pentecostal teenagers and young adults who will step into their destiny. We need the chosen to say, “If you can use anything Lord, You can use me.” Now is the time to stand up for what matters because we are running out of time to stand. The one God message still matters. You must be born again of the water and of the Spirit still matters. Separation in dress and lifestyle still matters. The redeeming power of the cross still matters. Sadly, the world calls this mentality radical and even politically incorrect. We are not what the world says we are or what the enemy says we are. We are what God says we are—we are chosen.

I Peter 2:9 puts it this way, “But ye are a chosen generation, a royal priesthood, an holy nation, a peculiar people; that ye should shew forth the praises of him who hath called you out of darkness into his marvellous light;”

I am deciding right now that I am chosen. 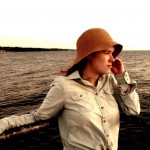 Olivia is a recent graduate of Anderson University where she studied family science. She is a musician and song-writer, a preacher, and a taco enthusiast.