Posted by: admin in Inspirational on March 1st

It looked so innocent to her. With childlike characters bearing happy faces, Valerie* just couldn’t believe anything could be wrong with it. But hidden behind those innocent smiles was a danger she had never seen before, something evil, and it almost took her life.

Before I tell you the rest of Valerie’s story, let’s talk about those seemingly happy characters she fell in love with. Japanese anime (pronounced “ani-may”) is often seen as cool cartoon characters in comics, books, video games, and movies. It has even evolved into animated pornography. Americans recognize anime through characters such as Astro Boy, Dragonball, Pokemon, Gundam, and many others. Their characters are often identified by their large eyes, exaggerated body parts, and various non-human powers. Anime came to life as a form of manga (Japanese comics) in the early 1900’s, but its history goes far beyond that.

Manga developed over hundreds of years ago, starting as pictures drawn on Shinto temple walls, then on wooden blocks, and finally as woodblock prints with captions collected in books.** The Shinto religion includes worshipping the spirits of ancestors and nature (idol worship). It also includes shamanic practices—going into a trance and using spirits to cause things to happen—and spirit possession where spirits enter people or objects giving them certain powers or abilities. The rest of Valerie’s story will demonstrate these things. 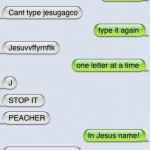 It was about 10:30 PM on a Friday night when she sent the first text. Valerie was worried, telling me she felt like she was not in control of her body. She was in a lot of pain and couldn’t stop moving. She had become possessed by an evil spirit. I told her to type “Jesus,” to which she replied “Jjjk”…she couldn’t type the name of Jesus. I knew she had been introduced to Japanese anime and asked her if she had been messing with it. She didn’t reply. After more instructions to type JESUS, and after many failed attempts to do so, the most startling text I’ve ever read came through. It said, “Stop it preacher” followed by “She is mine now, preacher.” I replied with an order for those spirits to leave and the texts stopped coming.

As Valerie’s pastor, I had dealt with demonic spirits before and knew deliverance was needed immediately! Within minutes, I was out the door and on my way to her home, picking up our youth pastor along the way. Her dad quickly led us to her bedroom where her mother was attempting to hold her down as she was being thrown against a wall. We rebuked the evil spirits and prayed the prayer of deliverance over her. The evil spirits left and Jesus filled her with the Holy Ghost as she began to speak His beautiful name.

As the situation calmed down, we began to talk about her involvement with Japanese anime. She had many pictures of anime characters tapped to her walls. She also gave us a book called “The Death Note,” she and her friends had been reading. This book contained detailed instructions of how to go into a trance and use your mind to take someone else’s life. All of this relates directly to the Shinto shamanic practices and spirit possession.

Those characters that seemed so cute and innocent contained evil spirits that tried to destroy her life, but Jesus had other plans! Four months later, Valerie shared with us that she felt God was calling her into some type of ministry. She recently spoke during a youth service about the power of the presence of God. The young lady who was bound by evil spirits had been delivered and called into the work of the Lord. It’s a story only Jesus could author!

The apostle Paul told us, “For we are not fighting against flesh-and-blood enemies, but against evil rulers and authorities of the unseen world, against mighty powers in this dark world, and against evil spirits in the heavenly places” (Ephesians 6:12 New Living Translation). Evil is often masked by innocence, just as it is with the innocent looking anime characters. But anything associated with ancestor worship, idol worship, trances, and spirit possession must be abstained from. There is no place for Japanese anime in the lives of Christians. It is evil, and we must call it evil, no matter how innocent it looks.

Surrendering our hearts and lives to Jesus will produce many blessings and give us power to overcome the darkness of this world—just as it has in Valerie’s life!

* Valerie is not her real name
** Tampa Museum Of Art: excerpt taken from the “My Reality” exhibit study guide

Rick Lovall is a husband, daddy, pastor, friend, and a whole bunch of other stuff God gives him to do.