Posted by: Editors Choice in Inspirational on October 8th

Let me begin with this statement—I am old! I know that seems like a strange way to start an article about Youth Day service at General Conference, but I am. I guess I have to start with that because my next line starts with “Back in my day….” Usually, when a sentence is started in such a way, it can’t be good. The speaker is usually about to go on…and on…and on…about how “their day” was SO much better. I assure you, that is not the case here.

This “old person” is impressed by what I witnessed at GC 2018 among our youth. “Back in my day” General Conference seemed like mainly a social event (to me and, from what I remember, to MANY, MANY others). Embarrassingly, I admit I really can’t remember actually going to church that much. Sure I looked like I was headed to church, but I don’t think I made it that far very often. Much of my General Conference “crew” is now in full-time ministry or faithfully serving the Lord in their local congregation. It’s not that we were not committed or did not love the Lord; I guess we just got easily distracted and didn’t take some things as seriously as we should have.

I’m sure we missed out on some awesome moves of God and didn’t even realize it. However, it is evident that there has been a shift with this generation of young adults. There is an obvious hunger and desire for purpose that exists among them. That attitude was on display last week in Louisville. Not only were young people in the church services, but they were actively engaged with what was going on in each one. From the beginning to end, they led the way, especially in the Spirit-led response to the message preached by Jerry Jones on Thursday night! Friday’s Youth Day service was no exception to this trend either.

Before service began, there were already hundreds of young people seated in the front rows ready to worship and receive from the Word. Stephanie Gallion and worship team got things started by leading us in an anthem that lifted up the great name of our King Jesus. Our UPCI Youth Ministries President, Josh Carson, then welcomed everyone and gave powerful testimonies of thanks to the Lord and to all those involved in raising a record-breaking Sheaves for Christ offering! In total, $5,364,411.42 was raised so we can continue to perpetuate the gospel of Jesus Christ around the world! As he gave the report, representatives from Global Missions, North American Missions, Tupelo Children’s Mission, and various young people from throughout North America joined him in presenting a wave offering of thanks using SFC “Advance” flags to celebrate together this historic year of giving.

Faith was high following these great testimonies, and we entered into another dynamic time of praise and worship. Our King of glory filled the convention center-turned-sanctuary as we were prepared to hear the Word. Pastor Chantry Dean of Bentonville, Arkansas preached a powerful and timely message entitled “So We Advance.” He admonished us that in an ever-changing world we must not decay or stagnate, but the church must always be moving forward. Advance!

I Corinthians 16:9 laid the foundation for the message, “For a great door and effectual is opened unto me, and there are many adversaries.” The open door indicates an opportunity to move forward into the next thing. Advance! The element of faith is essential to move through the door into the places God is calling us to. Advance! Our attention was then turned to Deuteronomy 1, from which we were reminded how the children of Israel were the moment just before their greatest advancement. Their food was literally falling from the sky and water was bursting forth from a rock. Provision was not an issue, but God had greater days ahead for them. Yes, they had to face adversaries, but God called them to advance! Our Lord is calling the youth of the UPCI to do the same. Though it might seem we are surrounded by adversaries, remember the early church and its apostles thrived in an atmosphere of adversity. We are the same church, calling on the same name, filled with the same Spirit, with the same call—to advance!

As the message drew to a conclusion, altars filled with those answering the cry to advance the kingdom. An intentional appeal was made to all young men and young women who have felt God specifically calling them to preach the gospel. From one end of the altar area to the other, so many stepped forward professing the call and cried out in complete surrender. We are certain that the second coming of Jesus Christ is drawing near, and there is a generation rising among us upon whom the ends of the earth have come. They stand ready to preach in the twenty-first century the same message the first century apostles preached. We are not satisfied to ride the wave of revival brought on by our predecessors. As great as our legacy is, today’s youth are determined to ADVANCE the kingdom of God in our world today. 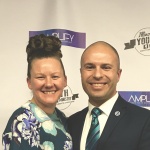 Mandy Brown is the mother of two wonderful kids: Jonathan (11) and Sophia (8). She is also a licensed minister with the UPCI serving alongside her husband David Brown who is the pastor of The Refuge Church in Rock Island, Illinois and the Illinois District youth president.