Posted by: Kaleb Saucer in Campus Ministry on August 20th

Most may not realize it, but the concept of campus ministry has a precedent established in the Bible. Long before there were school mascots, degree plans, and bad cafeteria food, students were gathering in places of higher education to learn and discuss differing philosophies of the times.

In Acts 19, we read of one such institution called “the school of one Tyrannus.” History reveals that this “school” was a lecture hall of some kind. In the first century, it would have been used to host the typical classes during the day, but at night it could have been reserved for other purposes. Here on this campus we find the apostle Paul disputing (teaching, discussing, conversing) daily with students who were eager to learn about the gospel. As a result of Paul’s efforts to teach and train students on that campus who had come from all over the continent, Scripture tells us, “All they which dwelt in Asia heard the word of the Lord Jesus, both Jews and Greeks” (Acts 19:10).

Today the potential of campus ministry remains the same as students who attend our campuses come from the local city and around the state. But beyond that, they often come from other parts of the country and even from other countries around the globe.

It has been said “the world comes to us through our college campuses.” This statement certainly rings true when we consider that of the 21 million students attending college on one of the 4,500 college campuses in North America, 1.2 million of these students are from other countries. We must realize we have been given a distinct opportunity to do something that will matter long after we walk across that stage to receive our diploma.

A few years ago, a foreign exchange student named Lin began attending LSU for the purpose of completing his degree and then returning back to his home country to use what he learned while in the United States. Somehow Lin got connected with a local Apostolic student named Micah who began to teach him a Bible study. Lin came from a country that is not receptive to any kind of religion and would actually punish and persecute anyone who professed to be a Christian. For this reason, Lin was very unfamiliar with the message of Jesus. Week after week, Micah and Lin would meet for Bible study, and it wasn’t long before Lin also began attending the local church on a regular basis. Because of the language barrier, it was hard to tell how much of what was being taught was actually being received.

It was a depressing day when the time came for Lin to return home. Knowing he was returning home to a hostile political and religious environment meant we couldn’t be certain what would happen once he got there. Several months passed with no contact from Lin, but about three months after he left, Micah received an email from him that read,

“I keep on reading my Bible every day. I also read some books concerning Christianity such as Mere Christianity and Purpose Driven Life. Now I know more about your belief.”

Several more months passed when we received another email that read,

“If you could speak [my language], I would have become a Christian last year! I now believe that Jesus is the son of GOD, the saver of human beings. There are so many people who do not know God in [my country], but the workers are so few. I will do my best to serve God. I am learning Biblical Greek by myself. Now, I can understand about half of the Greek New Testament. It is harder than English, but I will keep on. I also want to learn Biblical Hebrew in this winter.”

About six months after that, he received one final email from Lin that read,

“Thank God! Now I am studying in [the second largest university in my country]. The Christians in our center set up a double-language, multi-racial, secret Bible studying team in the center and we gather every Monday night in the library. It works well and there are about 10 students attending our meeting in the library per week. One of my friends, who claimed himself to be a communist at the beginning of this semester, decided to follow Jesus this Monday. I wish God could bless our team and we could attract more unbelievers into our team.”

And, he closed his email by simply saying,

“Again, thank you for all your efforts to introduce the Savior to me. I miss you every day and hope to see you again soon.”

Because one Apostolic student was willing to reach one foreign exchange student who did not know the first thing about Jesus Christ, an underground campus ministry started in a nation that is averse to Christianity and all it stands for!

Truly, when you reach your campus, you have the potential to reach your world!

You do not have to get on a plane and fly across the world to be a part of a global revival. You only need to walk across the street to your local campus and begin reaching souls with the gospel of Jesus Christ. You can join the army of hundreds and thousands of other campus ministers who are daily doing everything they can to evangelize their schools. 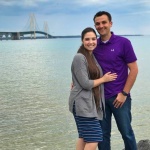 Kaleb Saucer serves as the director of Campus Ministry International. He has been actively involved in campus ministry and youth ministry for the past nine years. Kaleb and his wife, Ellerie, are currently living in Baton Rouge, Louisiana.