The Ripple Effect: My AYC Story

Posted by: Editors Choice in AYC on August 28th

Reading the story of David, I don’t believe Jesse understood the effect a little cheese and bread would have on the kingdom when he reached into his cupboard and sent David to the front lines of the battlefield. He intended to nourish the soldiers. However, the ripple effect caused a warrior to be birthed that would defeat a nation-crippling enemy. We rarely know the full impact of our actions. We may make one decision to affect one situation. However, we rarely see the whole outcome God intends. It’s God’s ripple effect.

Reggie came to a place in his life where he craved more of God. His heart was no longer content with where he had been—his soul longed for another life-changing experience from Jesus. This discontentment and longing led to action and Reggie decided to apply for Apostolic Youth Corps. After reading through the destinations, he immediately chose the small island country of Haiti. Being Haitian, he wanted to go and make an impact on the country of his heritage. When he was asked to translate a song into Haitian Creole for the trip, he gladly accepted the task. While Reggie could speak Kreyol Ayisyen, he could only speak it with medium proficiency, so he enlisted his father to help.

His parents do not attend an Apostolic church, but they took time out of their hectic schedules to develop a pure translation for Do It Again. Over the course of this translation project, Reggie could see the effect the lyrics were having on his father. As the words of faithfulness and promise began to stir his father’s soul, it seemed like God had a dual-purpose for the translation of this song of hope. While in Haiti, Reggie taught the song to hundreds of his people. As he sang each lyric, their souls were enlightened and their spirits lifted. The ability to minister despite the language barrier was the purpose and God blessed every effort.

After his return to the United States, Reggie noticed curiosity rising in his father. He asked for stories of miracles and moments of impact; he wanted to know what Jesus did for His people. One particular evening, Reggie was sitting on the couch watching a live-streamed church service from Haiti, the country that had stolen his heart. God had sent revival to a Haitian village. People were instantly healed, God was filling many with the Holy Ghost, and lives were being touched.

His father sat down next to him and began to ask questions about God and about the mighty miracles taking place in Haiti. The door that had been so long closed had finally been opened. Reggie was able to speak to His father about the power and presence of God. His father helped him translate a song about moving mountains. Now, his heavenly Father had moved the mountain between his father and the truth. As the weeks have gone by, Reggie’s parents have continued their journey to step into the full truth. A journey that began nine years ago with a financial miracle is still being written by God. He used an AYC trip to write another page.

Jordan preaches the gospel and only uses words if necessary. To his classmates, he was the kid who loved Jesus. Growing up in public school was a challenge, but Jordan held to his convictions and beliefs. His elementary best friend had a traumatic childhood and decided an atheist lifestyle would be the best option. Jordan tried for years to reach out, only to receive a rejection. This summer, Jordan attended AYC Ukraine. He posted about the amazing miracles God was performing on site. Unbeknownst to him, his childhood best friend was following along with every post. Upon his return from Ukraine, his friend sent him a message saying, “If God can do that for them, He can do that for me, too. I want to know more.” Jordan’s direct purpose was to impact the people of Ukraine, but the ripples traveled all the way back to a small town in Iowa to bring hope to a troubled heart.

When going on an AYC trip, you think about all the people you will impact at that destination. Rarely do we realize the impact it will have on the people indirectly connected to us. Our actions thunder through lives across the world. You never know who will be impacted. We never know the full plan of God, and that’s bliss. He allows us to help write someone else’s story.

That’s the beauty of ministry. 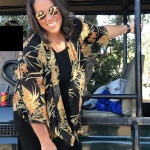 Seneatha Clayton serves as the director of Apostolic Youth Corps. She has been involved in short terms missions and youth ministry for the past twelve years. Her passions include travel, young people, and ministry! The three combined make for a fulfilling life chapter in AYC.