Posted by: Editors Choice in AYC on September 9th

This past August, nineteen young adults and four chaperones—the Reinkings and the Harrys—embarked on an AYC trip to Prague, Czech Republic to make His purpose our passion. Although the city is truly like a fairy tale in architecture and design, there are severe strongholds at work. According to research, 5% of Czech people are Protestant, 2% are Orthodox/ Evangelical, 13% are undecided, 40% are Roman Catholic, and the remaining 40% are atheist. The Czech nation places so much value on education and human ingenuity that it sees no place for faith; thus, Czech contains one of the largest atheist and agnostic populaces in the world. There is only one UPCI church in the country, maintaining around fifteen members. This was the spiritual battlefield we stepped into on August 5, 2017.

When we arrived, we met several people who had already been at work in the field. Pastor Zumar and his wife are the young local pastor and wife, while Missionary Matt and Angie Buckland, along with their two small sons Grant and Pierce, reside in Prague as missionaries. The Bucklands showed us the beauty of the city during our initial days in Prague to help us understand the culture and mindset of the people to whom we would be ministering. We toured the enchanting Prague Castle, St. Vitus Cathedral, Charles Bridge, and attended a concert in the Mirror Chapel of the Klementinum. On our fourth day, we even visited Terezin, a WWII concentration camp. Our group was thankful to be able to participate in Project 22:39 by cleaning the church. During that week, we were even blessed by a surprise visit from General Youth President Michael Ensey and the Robinette missionary family, encouraging our hearts.

Although we cherished the beauty of the architecture and history of Prague, we were there for a higher purpose. Throughout our touring, we began to sing about Jesus in the metros and on the streets, sparking curiosity in the citizens around us about the passion and light we carried within us. We used this music ministry to pass out flyers one day, inviting people to church as we marched around the park and sang about the goodness of God in the Czech language. The normally closed-up, resistant citizens of Prague began to come to us and ask for information about the church in an unprecedented way.

During our midweek service, the Spirit of God moved mightily, and the Prague congregation was blessed as the choir sang and Justin Reinking spoke with boldness and godly authority. There were five first-time guests who attended, which was again unprecedented. On Saturday, we held a street service in the park, where we were able to openly minister to citizens passing by. We testified, sang about the power of Jesus, and L.J. Harry delivered a sincere message to the people of Prague, imploring and inviting them to know Jesus. Several people there in the park asked for us to pray for them, and as we prayed, the Spirit of God ministered.

The next two days were also spiritually enriching. On Saturday, our group walked to the top of Vysehrad Castle—an overlook of the entire city. This is the place where the occult and witches come to cast spells over Prague. We gathered in Jesus’ name and began to openly pray in tongues toward the north, south, east, and west, opposing the forces of darkness with great boldness. We bound heaviness, prayed over the government, and loosed peace in that place. The atmosphere was spiritually charged, and we could feel the power of God with us. Two Christian women from the Ukraine joined us to pray, and many passersby were intrigued as we prayed and sang openly toward Heaven. On our last day in Prague, we had service at the church. The small space was suddenly packed with people who wanted to hear the Word of God!

We were so blessed to be able to attend this AYC trip to Prague. Saints and visitors alike were encouraged, and the spiritual atmosphere in Czech has been set for revival. We believe God is about to move in that country, and we are thankful to have been a part of that. Not only did we leave an impact on Prague, but it left an indelible impact upon each of our lives. We became a family who developed great love for each other, and we learned the important lesson that if we do our part—however small it may be—God will certainly do His. It is our prayer that in these last days and in this chosen generation, those who hear the call to go and make His purpose their passion will respond.

The harvest truly is ripe, but the laborers are few. 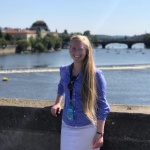 Becca Jones is a high school English teacher and attends The Peninsula Pentecostals in Newport News, Virginia. Jared Arango is her pastor.